Trusting the advice of experts and politicians amid this pandemic

Hague Letter: ‘I needed to know before I took a potentially lethal risk, is it safe?’ 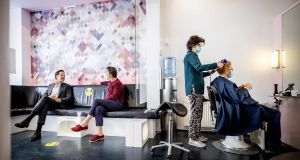 P J O’Rourke is one of those writers whose books have never quite lived up to their titles. But who cares? You’ve got to love anything named Holidays in Hell, Give War A Chance, The CEO of the Sofa, or my current topical favourite, Age and Guile Beat Youth, Innocence and a Bad Haircut.

What brought the American political satirist to mind was that Dutch barber shops reopened last week as part of the easing of the coronavirus lockdown, raising the question of whether the time was right to succumb to the demands of vanity, even for those of us (marginally) over 60.

In other words – to date myself even more precisely – like the wonderfully menacing Laurence Olivier, dentist’s drill in hand, looming over a terrified young Dustin Hoffman in the ’70s classic, Marathon Man, I needed to know before I took a potentially lethal risk, is it safe?

The thing about the Dutch is that they’re a pretty no-nonsense people who generally trust the advice of their politicians and experts in matters of life and death.

Hence the soaring personal ratings of prime minister Mark Rutte, whose party is nine seats up in polling since the pandemic began; the pretty universal derision for Donald Trump and his crackpot cures, and the new term of contempt for those who bang on endlessly about the virus without having a notion what they’re talking about – toogviroloog or “blather virologist”.

Another example of that tell-it-like-it-is approach is the public health guidance to single adults that they should consider “mutually satisfactory arrangements” with temporary “sex buddies” as an aid to mental health while the crisis continues – an issue which, to be best of my knowledge, hasn’t yet been raised in daily briefings in Dublin or London.

So, with schools, restaurants, cafes and even cinemas due to reopen from June 1st, one might imagine that hairdressers, barber shops and nail salons would be a relatively straightforward proposition: masks, regular disinfection, hand sanitisers, social distancing, and limited conversation?

All correct, I was told when I contacted my regular barber shop, except that masks were not required. There was no evidence that they worked. They weren’t being worn by the barbers. Nor were customers required to wear them.

So what, I asked – having armed myself unfairly in advance – about the fact that contagiousness begins, on average, 2.3 days before symptoms emerge and peaks 0.7 days before, and that as a result, in four out of 10 cases, coronavirus is spread by those not obviously ill?

That, as I expected, was a question too far and we reverted cordially to the national guidance: “If you feel healthy, come in, and if you don’t feel healthy, don’t come in.”

It must have been the effects of lockdown, but I could have sworn I heard Clint Eastwood from Dirty Harry in the background, taunting, “Well, do you feel healthy, punk?”

Clint’s scepticism was right on the money. Because, although despite my misgivings, I went ahead there and then and booked my slot for Friday last at 3.15pm, I subsequently cracked on Wednesday afternoon and phoned back to cancel, offering to pay for the inconvenience.

What decided me? The absence of masks, first. But more than that, it was the return of driving tests, an interesting case where social distancing can’t work between student and tester, and screens were ruled out because they would prevent the tester from taking control of the car in a crisis.

The explanation? “We gave a lot of thought to this,” said the boss of the driving authority. “In the end we decided that if applicants can state clearly that they’re not sick and are abiding by hygiene measures, that should be enough.”

“No, it shouldn’t,” I shouted at the radio, lifting the phone to cancel my haircut in protest.

My hairdresser got in first and told me he too had had a rethink. He would wear a mask especially for me – and in fact would also provide one for me to wear. Risk on, as investors say.

So, there were two of us in the shop last Friday wearing masks and four others – two barbers and their customers – without them.

It was a new experience for both of us. Whether it made any sense, I had no idea in the end.

I guess that’s what’s known as “going Dutch” in a pandemic.

1 Coronavirus claims one more life while 11 new cases reported in Republic
2 Covid-19: Travel restrictions to stay and 'green list' put on hold amid fears of second wave
3 Bobby Storey: The IRA's planner and enforcer who stayed in the shadows
4 Gardaí seek help in finding missing Roscommon toddler
5 ‘Only a civil servant’ could have come up with ‘unenforceable’ pub regulations
Real news has value SUBSCRIBE