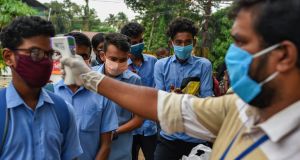 School children wearing masks get their hands sanitised and temperatures checked as they arrive to appear for state board examination during the coronavirus pandemic in Kochi, Kerala state, India, on Tuesday. Photograph: R S Iyer/AP

The coronavirus has infected almost 5.5 million people across the world and killed more than 346,000, according to a tally kept by Johns Hopkins University. Here are the latest updates on the pandemic from around the world:

The United Kingdom’s coronavirus death toll surpassed 47,000 on Tuesday. The Office for National Statistics said 42,173 people had died in England and Wales with suspected Covid-19 as of May 15th, bringing the UK total to 47,343 - which includes earlier data from Scotland, Northern Ireland, plus recent hospital deaths in England.

A death toll of nearly 50,000 underlined Britain’s status as one of the worst-hit countries in a pandemic that has killed at least 346,000 worldwide. British prime minister Boris Johnson, already under fire for his handling of the pandemic, has had to defend his top adviser Dominic Cummingswho drove 402km (250 miles) from London to access childcare when Britons were being told to stay at home to fight Covid-19.

The foreign minister has said European Union members should agree to a common approach to open borders, re-establish freedom of travel in the Schengen Area and define which countries outside it should be considered safe to travel from and to. Arancha Gonzalez Laya told Spanish radio that restarting cross-border travel should be decided collectively even if countries in the EU are phasing out lockdowns at different dates. The minister said that Spain is eager to welcome tourists to shore up an industry that amounts to 12 per cent of the country’s GDP but that it plans to do it with “health, sustainability and safety.”

The government has reported a record daily spike of 174 deaths, bringing the country’s death toll to 3,807. Russia’s coronavirus caseload surpassed 360,000 on Tuesday, with almost 9,000 new infections registered in the past 24 hours. The country’s comparatively low mortality rate raises questions among experts both in Russia and in the West, with some suggesting the government may be manipulating the statistics and under-reporting virus-related deaths. Russian officials vehemently deny the allegations and attribute the low numbers to the effectiveness of the measures taken to curb the spread of the outbreak.

Estonia has started piloting a digital immunity passport that enables people to share their Covid-19 status with a third party, such as an employer or authorities. The ImmunityPass mobile and web application collects coronavirus testing data. It has been created by a non-government organisation supported by Estonian start-up entrepreneurs and medical officials. The World Health Organisation has warned against issuing such immunity passports to people who have recovered from coronavirus because there is no evidence they are protected from a second infection.

For a seventh consecutive day, India has reported its biggest jump in coronavirus cases. The country’s health ministry reported 145,380 new infections, an increase of 6,535 from the day before, and 4,167 deaths.

Officials say the recovery rate has also risen above 40 per cent.

An uptick in cases has also been reported in some of India’s poorest eastern states as migrant workers returning to native villages from India’s largest cities have begun arriving home on special trains.

India’s virus caseload has been climbing as pandemic lockdown restrictions have eased. Domestic flights resumed on Monday after a two-month hiatus, though at a fraction of normal capacity. Health ministry officials said that India’s death rate stood at 0.3 deaths per 100,000 people, compared to what they said was a world average of 4.4.

Tensions are rising between federal and state leaders over differing approaches to lifting pandemic restrictions.

Nearby neighbour New Zealand has had similar success in slowing the virus spread. New Zealand has gone four days without detecting a new infection and has recorded a single new case in the past week.

President Rodrigo Duterte has ordered about 24,000 workers who have lost their jobs abroad due to the Covid-19 pandemic to be transported by land, sea or air to their homes, and warned local officials not to refuse them entry.

The workers returned to the country in recent months but had to undergo two weeks of quarantine in hospitals, hotels and makeshift isolation centres in metropolitan Manila in a chaotic situation that delayed their trip home and sparked a myriad of complaints.

Some had to wait weeks to be tested for the coronavirus and receive results.

Mr Duterte said in televised remarks that some provincial officials have refused entry to returning workers from abroad as a precaution and warned them of possible lawsuits.

Authorities have been scrambling to unclog quarantine facilities in the capital with about 300,000 more displaced Filipino workers slated to come home soon.

“I’m ordering you to accept them, open the gates of your territories,” Mr Duterte said. “Do not impede it. Do not obstruct the movement of people, because you run the risk of getting sued criminally.”

South Korea has reported 19 new cases of the coronavirus.

Most of these are from the densely populated Seoul metropolitan area, where officials have been actively tracing transmissions linked to nightclubs and other entertainment venues.

South Korea has been reporting around 20 new cases per day over the past two weeks after health workers found hundreds of infections linked to club goers who went out in early May as the country eased social distancing measures.

The new infections in the greater capital area have caused concern as authorities proceed with a phased reopening of schools, which began with high school seniors last week.

Around 2.4 million high school juniors, middle school seniors, first and second graders and kindergarten students will be returning to school on Wednesday.

Authorities have reported seven new coronavirus cases, all brought into the country by Chinese citizens returning from abroad.

Just 81 patients remain in hospital with Covid-19, and another 408 are in isolation and being monitored for either suspected cases or after testing positive for the virus without showing any symptoms. China has reported a total of 4,634 deaths from the disease among 82,992 cases.

With the decline in numbers, students have gradually returned to class and some international schools in the capital Beijing are preparing to re-open on June 1.

China is proceeding this week with the annual session of its ceremonial parliament, which is being held under social distancing restrictions.

A ban on foreign travellers arriving in the US from Brazil due to the surge in coronavirus cases there will now take effect late on Tuesday, two days earlier than previously announced.

The ban had been set to go into effect late Thursday. The White House announced the change on Monday without explanation.

Brazil is second to the US in the number of confirmed Covid-19 cases, according to a tally from Johns Hopkins University, and has seen cases surge in recent days.

The White House cited Brazil’s status as Latin America’s hardest-hit country on Sunday when it announced the ban, saying it would prevent additional infections in the US.

The World Health Organisation has warned Brazil against reopening its economy before it can perform enough testing to control the spread of the pandemic.

The organisation’s executive director, Michael Ryan, said in a news conference that Brazil’s “intense” transmission rates meant it should keep some sort of stay-at-home measures in place, regardless of negative impacts on the economy.

Rio de Janeiro’s mayor Marcelo Crivella, an evangelical bishop, announced he is including religious institutions in the list of “essential services”.

This means churches would be able to open their doors, while keeping a minimum two metres between attendees, in spite of existing recommendations for people to stay at home and most businesses remaining shut.