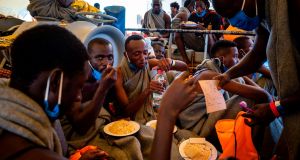 Migrants have a meal on board the SeaWatch 4 civil sea rescue ship, that is waiting for permission to run into a port, on sea between Malta and Italy. Photograph: Thomas Lohnes/AFP via Getty Images

A boat carrying dozens of refugees burst into flames off the coast of southern Italy on Sunday as its passengers were being transferred to Italian naval vessels to take them to port.

Three people are confirmed dead and three were missing at sea. Six people are in hospital with serious burn injuries, including two Italian officials who were taking the people off the boat.

The vessel was approached by an Italian naval ship that was in the process of taking migrants on board and, according to reports, suddenly caught fire, most likely because of a fuel leakage, then exploded. The number of victims was still uncertain.

Bathers at a beach near Crotone watched dark smoke pour out of the vessel on the sunny Sunday afternoon.

“Between five and seven migrants are feared missing. Four migrants are in hospital with serious burn injuries, and two rescue workers have suffered injuries. Twelve migrants were transported to a welcome centre.” A reconnaissance plane was searching for survivors at sea.

Meanwhile, a boat with 450 migrants on board was rescued by the Italian coastguard off the island of Lampedusa as it risked capsizing in strong winds. At the weekend a further 500 migrants have arrived at Lampedusa on small boats, causing a backlash among a portion of the local population.

“We’re on our knees,” said Salvatore Martello, mayor of Lampedusa. “The situation is unbearable. Either the government has to take immediate decisions, or the entire island will go on strike.”

On Saturday, the UN refugee agency urged European nations to let in hundreds of people rescued from the Mediterranean by humanitarian boats, including one vessel financed by the British street artist Banksy.

The UNHCR and the International Organisation for Migration (IOM) said more than 200 rescued refugees needed to get off the nonprofit search-and-rescue ship Louise Michel immediately, saying it was far beyond its safe capacity.

The plea from UNHCR and IOM also mentioned hundreds of migrants on two other charity ships in urgent need of safe harbour.

On Saturday, the Italian coastguard answered a distress call from the Louise Michel, and took charge of 49 of the people who were most in need of help, it said.

By late Saturday night, all passengers on the Louise Michel had been transferred to the SeaWatch4, which was left with about 350 people on board. It was looking for a safe seaport to disembark the passengers.

So far in 2020, more than 500 refugees are known to have died in the Mediterranean, and the real number is estimated to be considerably higher. – Guardian