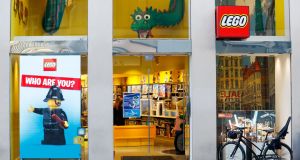 The Lego A/S store in Copenhagen, Denmark, says it has to prioritise certain language versions and is not able to provide information in every language. Photograph: Luke MacGregor/Bloomberg

Toy-making giants Lego and Playmobil are facing legal action by the government of Catalonia for failing to include the region’s language in the packaging and instructions of their products.

According to a 2010 consumer law, all texts sold with products in the north-eastern region of Spain must include a version in Catalan. But Lego and Playmobil have refused to comply, according to the Plataforma per la Llengua, an NGO promoting the Catalan language which instigated the legal action.

The case is now being investigated by the Catalan Consumer Agency, which the regional government oversees, and the companies could face fines of up to €100,000.

“It’s not as if the Catalan government wants to impose Catalan just for the sake of it, it’s because [the companies] are breaking the law,” said a spokesman for the Plataforma per la Llengua.

The NGO says that only 8 per cent of toys on the Catalan market currently comply with the law by including the region’s language in their packaging. Denmark’s Lego and Germany’s Playmobil make up a large portion of the Spanish toy market.

* Lego says it wishes to comply with legislation everywhere in the world. It insists it is complying with EU toy safety regulations for Spain and that its refusal to use Catalan is not driven by a position against the language, but rather because the company has to take into account the fact that its products are sold worldwide. “This means we have to prioritise certain language versions and we aren’t able to provide information in every language,” said Roar Rude Tranbaek, a Lego spokesman.

The Plataforma per la Llengua says both companies originally agreed to comply with the law but then backtracked after consulting with the Spanish authorities.

A longstanding campaign by successive Catalan nationalist governments to promote their language has fed into political tensions, with some unionists claiming it is used to separate the region culturally from the rest of Spain.

In the Balearic Islands, the Socialist regional government has also promoted the use of Catalan, a command of which is now required for those wishing to work in the healthcare system and the judiciary.

Last month, the Balearic parliament approved a regulation that meant musicians in the archipelago’s symphony orchestra who spoke no Catalan would be given a year to attain a basic mastery of the language. They would then be given a further year to perfect their Catalan.

Mas Movem, a platform opposing what it sees as growing Balearic nationalism, has taken legal action against such measures. It described the regional government’s initiatives as a “political obsession dressed up as a linguistic right”.

* This article was amended on January 11th to clarify Lego’s position.