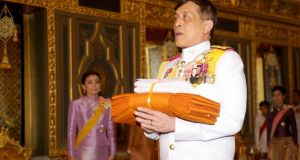 Angela Merkel’s government has warned Thailand that the Thai king should stop conducting state business from German soil, in an unusual intervention that comes at a time of nationwide student protests in the kingdom.

It has long been an open secret that King Maha Vajiralongkorn, who was crowned Rama X last year, lives for much of the time in Germany. German media have reported that he stays with his household in a hotel in Garmisch-Partenkirchen, in the Bavarian Alps.

Green party politicians in the state of Bavaria, who have questioned the king’s tax status, say they have established that he was living in a villa in Tutzing on Starnberger Lake near Munich at the time of his late father King Bhumibol Adulyadej’s death in 2016.

The issue of the king’s foreign residence has now become a flashpoint in Thai domestic politics, with members of the student-led protest movement that has been holding regular demonstrations since July often making critical or satirical references to the fact that he lives in Germany.

Maria Adebahr, spokeswoman for the German foreign ministry, said on Friday that the government had repeatedly stressed to Thailand’s ambassador to Berlin that “foreign affairs of state should not be pursued from German soil”. “We have made our position very clear,” she said.

The king has been in Thailand this year only on short holiday visits. However, he arrived on Saturday for what Thais expect will be a longer stay. Thammasat University has said that the king and his wife Queen Suthida will participate in a graduation ceremony at the end of October.

Asked last week how Germany would respond to the king engaging in domestic politics from German soil, Heiko Maas, foreign minister, said: “We would always clearly counteract efforts by guests in our country to conduct affairs of state from our country.”

He was responding to a question by Frithjof Schmidt, an MP for the opposition Greens, who asked why the German government had for months been allowing the king to engage in domestic politics from Bavaria.

He cited the example of the king’s role in preventing his elder sister, Princess Ubolratana Rajakanya, running as a candidate for the prime minister’s Thai Raksa Chart party, which was disqualified shortly before the March 24th election.

Inside Thailand, media and the palace rarely address the issue of the king’s residence abroad because of the risk of falling afoul of laws protecting the royal family from criticism.

But the tone has become less deferential as the student protests have gathered pace. The demonstrators are calling for the resignation of Prayuth Chan-ocha’s royalist government and the scrapping of Thailand’s military-drafted constitution. They are also making unprecedented calls for limits on the powers of the monarchy.

The protesters are promising to hold their next mass event on Wednesday at Bangkok’s Democracy Monument, which commemorates the 1932 uprising against absolute monarchy in what was then Siam.

Ms Adebahr, the foreign ministry spokeswoman, said the Thai authorities had assured Berlin that “it is the prime minister who conducts government business, and the King of Thailand, as the head of a constitutional monarchy, which Thailand is, lives in Germany in a private capacity”.

But “if there were any evidence that the king was indeed conducting government business from here, and that would require a reaction from us, then we would have to assess the situation when that occurs”, she added.

Mr Schmidt, the Green MP, also asked Mr Maas if the German government might push to freeze talks on a free trade deal between Thailand and the EU as long as the Thai authorities continued to “block the path to democracy in Thailand”.

The talks were suspended after the 2014 coup but revived in late July after the new government was sworn in.

“Actually I consider that an option which we in the EU should keep open,” Mr Maas said. He added that the free trade deal could be used as “leverage” to encourage a return to democracy in Thailand. “But I wouldn’t want to exclude that if they continue to behave in the way they are now . . . that we could also [freeze trade talks].” – Copyright The Financial Times Limited 2020