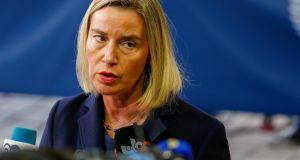 High representative of the European Union for foreign affairs and security policy Federica Mogherini: warned Turkey “any kind of demographic engineering in the region would be particularly dangerous”. Photograph: Julien Warnand

EU foreign ministers have unanimously condemned Turkey for its “unilateral military action in northeast Syria” and demanded it withdraw its forces.

Meeting in Luxembourg, the ministers also urged preparation of a framework for sanctions against Ankara over its illegal oil drilling in Cypriot waters and applauded member states which have imposed arms embargoes over Syria.

The European Commission will draw up a list of people and companies to be targeted for their role in the drilling, which was recently extended by Turkey with a third rig.

The meeting’s conclusions will form the basis for EU leaders’ discussion on Turkey at their summit on Thursday. Ireland, represented by Tánaiste and Minister for Foreign Affairs Simon Coveney, gave its strong support to the measures.

Deeply concerned at the possibility that the attack on northern Syria may lead to what high representative for foreign policy Federica Mogherini called a “resurrection” of Islamic State (Isis), the Foreign Affairs Council also called for the convening of an urgent ministerial meeting of the Global Coalition to defeat Isis – 81 states and international organisations of which the EU and US (and Ireland) are part.

Although the ministers were unwilling to agree formal sanctions over Syria, their support for member states that have imposed arms embargoes against Turkey, and promise of co-ordination of further action along those lines, was tantamount to an EU embargo, Ms Mogherini said, arguing that the move allowed action more immediately than the EU’s more cumbersome sanctions process.

Asked if the arms embargo language meant an embargo was mandatory on all member states, Ms Mogherini insisted that it was “not just allowing them to do it, but unanimously committed to it”. Subject, she noted, to their obligations as Nato states.

The move was initially not unanimous, however. There was surprise at the reluctance of the UK to use a word as strong as “condemn” out of deference, diplomats speculated, to what the ministers’ statement called “a key partner” and a fellow Nato member state.

Bulgaria also cautioned against too sharp language out of concern that Turkey could carry out its threat to push thousands of refugees out across the eastern Mediterranean. But after a lengthy discussion during which Ms Mogherini warned that if they did not at least condemn Turkey they would be seen as doing nothing, objections were withdrawn.

Ministers reiterated their commitment to the €6 billion EU funding for Syrian refugee camps in Turkey but warned that “it will not provide stabilisation or development assistance in areas where the rights of local populations are ignored or violated”. Turkey can expect no help in resettling refugees back to so-called safe areas in northern Syria.

Ms Mogherini warned Turkey that “any kind of demographic engineering in the region would be particularly dangerous”. The ministers’ conclusions warned that the Turkish move “undermines the stability and the security of the whole region, resulting in more civilians suffering and further displacement and severely hindering access to humanitarian assistance”.

“It makes the prospects for the UN-led political process to achieve peace in Syria far more difficult,” they said. The UN special representative on Syria, Geir Pedersen, attended and briefed the meeting.

Asked about the reports that Syrian Kurds, deserted by the US, had now agreed to make common cause with the Assad government, Ms Mogherini would not be drawn. The EU was not a military player in the region and had repeatedly warned of precisely this danger, which had now come to pass, she said. “The level of complexity increases,” she said.