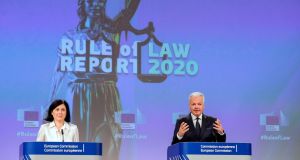 How to deal with governments that interfere with judicial independence, allow corruption and abet the erosion of democratic norms is at the centre of a deepening stand-off at the heart of the European Union.

On Wednesday the European Commission released its first report on the rule of law in the EU, documenting the state of justice systems, corruption safeguards, media plurality and freedom, and institutional checks and balances in each member state.

It comes as the bloc wrestles with how to prevent money from an unprecedented €750 billion stimulus programme designed to counter the economic impact of the coronavirus pandemic from aiding anti-democratic political forces or falling into the hands of organised crime.

The first of its kind, the report raised concerns over judicial independence in Hungary, government influence over the media and a “weakening of independent institutions and the increased pressure on civil society”.

Safeguards against corruption have been weakened, and the report cited a “systematic lack of determined action to investigate and prosecute corruption cases involving high-level officials or their immediate circle” in the country.

In Poland, a series of reforms have “increased the influence of the executive and legislative powers over the justice system and therefore weakened judicial independence”, the report found.

“Democracy, rule of law and fundamental rights are the foundations on which everything else is based in our union,” commission vice-president Vera Jourova said as the report was unveiled. “The European Union was created also as an antidote to those authoritarian tendencies.”

Bulgaria, Romania, Croatia and Slovakia were also criticised for shortcomings in ensuring their courts’ independence, while the report decried corruption scandals in Bulgaria, Slovakia, Croatia, the Czech Republic, Hungary and Malta and warned that some emergency coronavirus measures had gone too far in restraining the media and civil society.

On the eve of the report’s release, Hungary’s right-wing authoritarian prime minister Viktor Orban wrote to the commission to demand Ms Jourova’s resignation and announcing his government would no longer deal with her, accusing the Czech commissioner of making “derogatory” comments about Hungary.

Ms Jourova’s description of the central European state as an “ailing democracy” was “a direct political attack” and a “humiliation to Hungary and the Hungarian people”, the letter to commission president Ursula von der Leyen read.

Member states are now heading for a stand-off over proposed safeguards that would make the release of funds from the €750 billion recovery plan contingent on member states’ observance of the rule of law.

The package was agreed in July, but the details of how the safeguards would work was left vague to get the agreement over the line.

Many member states are eager to finalise the details and get the money flowing into their struggling economies, which requires the deal to be ratified in national parliaments. A compromise interpretation of the rule of law clause put forward by Germany won the support of most member states on Wednesday.

But more than one EU government have insisted that the wording be changed, warning that the whole package could fail to pass in national parliaments unless the rule of law clause is altered to their liking.

Member states are opposed to it for opposite reasons: Poland and Hungary insist on looser safeguards, while Sweden, Finland, Denmark, Belgium and the Netherlands are insisting that the conditions be made tougher.