How Brexit is being shaped by parliamentary referee John Bercow 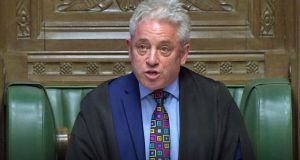 Speaker of the House of Commons John Bercow: his political views have changed radically over the years. Photograph: PA Wire

In sport, some umpires tip the balance. In the arts, some critics outshine the performers. And in British politics, the speaker of the House of Commons now often wields more influence than the MPs he oversees.

John Bercow – who supported Remain in the EU referendum – has played a key role in the parliamentary debate around prime minister Theresa May’s Brexit deal. His decision on Monday that the deal cannot be put to a third vote without substantial changes was a constitutional bombshell.

He was savaged by several British newspapers on Tuesday, with the Daily Express calling him “the Brexit destroyer”.

Late last year Bercow faced calls from some Conservative MPs to resign as speaker because of bullying allegations, which he has denied.

But Labour MPs backed him to stay in post, aware of his passionate commitment to parliament holding the government to account – and thereby making May’s life difficult.

In January he allowed a manoeuvre by pro-EU MPs to force May to present a Brexit plan B within days after she lost her first vote.

Conservatives fumed that Bercow (55) was tearing up years of parliamentary precedent.

“If we were guided only by precedent, manifestly nothing in our procedures would ever change,” replied Bercow, who served as a Tory MP before he was elected speaker and took on a responsibility to be politically impartial. Bercow has the power to select which MPs’ amendments to May’s Brexit deal are voted on.

Since he became speaker in 2009, Bercow has never shied away from upsetting the executive. In 2013 he allowed Eurosceptic Tory MPs to seek to amend the Queen’s Speech, outlining the government’s legislative programme, in a way that some argued pushed the then prime minister David Cameron into accepting a Brexit referendum.

Last year he blocked US president Donald Trump from addressing parliament on his state visit to the UK, citing Britain’s “opposition to racism and sexism”.

While some Tories appreciate the power he has given to rank-and-file MPs, others fume at what they see as bias. “Some of the ways he talks to our colleagues is unacceptable,” said one senior Conservative MP. “And I’ve never once seen him talk like that to Labour.” Another Tory MP said Bercow was “so unprofessional”.

Bercow has defended his handling of Commons debates. A spokeswoman said: “The speaker champions good order in the chamber and parliament’s right to have its say.”

Much of the government’s difficulties in parliament stem from the Conservatives’ lack of a Commons majority.

Nonetheless, grumbling about Bercow has increased since November. On one occasion when May addressed the Commons on Brexit, the first 31 MPs who Bercow called to speak were all critics of her deal.

He was then instrumental in helping Labour to bring an unprecedented motion of contempt in the government, for failing to publish its Brexit legal advice.

“The speaker has a political agenda, which is wholly inappropriate,” said James Duddridge, a Conservative MP who led an unsuccessful effort to unseat him in 2017. “Labour find him convenient, because he’s a more effective opposition than their own leader. Who’s made more hits on the government – speaker Bercow . . . or Jeremy Corbyn?”

Bercow’s rise to prominence is notable for how his political views have changed radically over the years.

The son of a London cab driver, he joined a Conservative youth group that produced “Hang Nelson Mandela” posters.

Elected as a Tory MP in 1997, he was initially a staunch Eurosceptic. But he moderated his views, and was elected speaker, with Labour support, when the Commons was at a low ebb following the MPs’ expenses scandal.

His modernising moves have included the election by MPs of Commons select committee chairs, seizing a power previously held by party whips.

Although parliament’s procedures are set out in a book known as Erskine May, he has revived previously little-used arrangements – such as urgent Commons questions, which force ministers to reply to MPs’ concerns on an issue of the day.

On Monday, he cited a convention dating back to 1604 in his statement ruling out a third vote on May’s Brexit deal.

Even admirers of Bercow, a tennis fanatic, say there is a flipside: grandstanding, pomposity and flashes of rudeness.

Last year Bercow was accused of calling Andrea Leadsom, leader of the Commons, “a stupid woman” – a claim he has denied. His former private secretary signed a non-disclosure agreement in 2010, after claiming he had been shouted and sworn at by the speaker. A report by Laura Cox, a former judge who investigated complaints of bullying by Commons staff, concluded it was “difficult to envisage” a culture change under current leadership.

No one disputes Bercow’s love of his job. “I am an unusual fellow,” he once told MPs. “I enjoy few things more than listening to my colleagues asking questions and ministers answering them.”

Perhaps his love for parliament explains his distaste for a second referendum: in 2017, he described the prospect as “absolutely for the birds”.

The speaker has indicated he will step down in 2019, a year later than he first promised. Until then, many MPs admit that trying to sway him is about as effective as shouting at the referee.

“It’s a game,” said one minister. “Some people try to rile him. But he’s more powerful. In the chamber he’s all powerful.” – Copyright The Financial Times Limited 2019