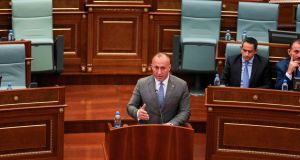 Kosovo prime minister Ramush Haradinaj at the parliament in Pristina on Thursday. Kosovo’s move to slap Serbian imports with a 100 per cent tariff triggered a new surge of tensions between the former foes. Photograph: AFP/Getty Images

The European Union has called for calm after Kosovo imposed 100 per cent tariffs on goods from Serbia and Belgrade claimed its neighbour was boosting security near their shared border, in the latest row to raise tension in the Balkans.

Kosovo introduced the import tax after Serbia again lobbied successfully to keep it out of Interpol, the international police organisation, which is one of many multilateral bodies that Belgrade does not want its former province to join.

After a 1998-9 war between Serbian troops and Kosovar separatists and a period of UN administration, the mostly ethnic-Albanian state declared independence in 2008, and much of the West recognises that status.

Serbia and main ally Russia reject Kosovo’s sovereignty, however, and EU-brokered negotiations have failed to bring Belgrade and Pristina to terms, while recent talk of a compromise deal involving a land swap between the neighbours has stoked fears of a new round of destabilising border changes in former Yugoslavia.

“We call on the two leaderships to bring to an immediate end these provocations and focus on completing normalisation of relations without further pre-conditions,” EU spokeswoman Maja Kocijancic said on Thursday.

EU foreign policy chief Federica Mogherini said Kosovo’s decision “to increase the tax on goods from Serbia and Bosnia . . . is a clear violation of the Central European Free Trade Agreement [Cefta] and the spirit of the Stabilisation and Association Agreement between the EU and Kosovo”.

Kosovo’s prime minister, Ramush Haradinaj, showed no sign of backing down, however, telling parliament in Pristina that the levy “should be permanent until recognition” by Belgrade of his country’s statehood.

His deputy, Enver Hoxhaj, said Serbia’s efforts to keep Kosovo out of Interpol were part of “its aggressive campaign against Kosovo in the international stage” and warned that more retaliatory measures would be “announced soon”.

Serbian milk and newspapers reportedly were among products immediately affected by the tariffs, and which were not delivered to mostly ethnic Serb northern Kosovo and so-called Serb enclaves dotted around the rest of the country.

Serbian president Aleksandar Vucic partly blamed the West for the latest row due to what he sees as its bias towards Kosovo, and he claimed that Pristina had sent special police forces towards the border between the two states.

He said the police may have been deployed to the disputed Gazivode lake “to flex their muscles or . . . to prevent goods from Serbia crossing to Kosovo” through parts of the border that are not usually guarded.

“Should we allow Serb children to have no milk from Serbia to drink? We will fight and we will not let that happen so easily,” Mr Vucic declared.

“They want to exert pressure on Serbia to win our unconditional capitulation and recognition of their independence. That will not happen.”

1 Aaron Brady, the man who said with pride he was a cop killer
2 Coronavirus: 40 new cases and one more death confirmed by Nphet
3 Aaron Brady found guilty of capital murder of Det Garda Adrian Donohoe
4 Covid-19 in Ireland: Colour-coded response set to replace phases
5 Covid-19: Restrictions an attempt to prevent State going back to ‘beginning’
Real news has value SUBSCRIBE