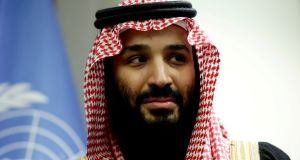 Saudi Arabia’s Crown Prince Mohammed bin Salman. Donald Trump declared that he was sticking by the crown prince despite accusations that he was behind the killing of Khashoggi. Photograph: Amir Levy/Reuters

Denmark has suspended future approvals of weapons and military equipment exports to Saudi Arabia in response to the killing of a dissident Saudi journalist and the kingdom’s role in the conflict in Yemen, the Danish foreign ministry said on Thursday.

Germany has already suspended issuing future weapons export licences and has moved to halt all arms sales, while France said on Monday said it will decide soon on sanctions over Khashoggi’s killing at the Saudi consulate in Istanbul last month.

Saudi Arabia is one of the world’s biggest weapons importers. It heads a military coalition fighting in a civil war in Yemen in which tens of thousands of people have died and caused a major humanitarian catastrophe.

“With the continued deterioration of the already terrible situation in Yemen and the killing of Saudi journalist Jamal Khashoggi, we are now in a new situation,” said foreign minister Anders Samuelsen in a statement.

Denmark issued 10 such approvals last year, according to the ministry. Already given approvals will not be suspended, a spokesman said.

Meanwhile, US president Donald Trump on Wednesday praised Saudi Arabia for helping to lower oil prices but pressure intensified for the United States to impose tougher sanctions on its Middle East ally over Khashoggi’s murder.–Reuters