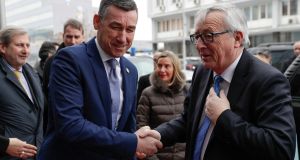 Top European Union officials have told Bosnia’s leaders to heal its ethnic rifts, strengthen its economy and rule of law and agree on election reform if they want to accelerate towards eventual membership of the bloc.

The officials used the trip to reinforce key messages from an EU enlargement strategy for the region that was unveiled last month – that no country will be allowed to join without enacting major democratic change and resolving ethnic and regional disputes that linger from the bloody break-up of Yugoslavia.

“It requires joint efforts for a state to become a member . . . When there are differences it leads to paralysis, it leads to delays.”

Deeply dysfunctional Bosnia is still run in line with the Dayton peace agreement of 1995, which divided it into two entities, Serb-run Republika Srpska and a Muslim-Croat Federation, with the latter then subdivided into 10 cantons.

The EU and United States have long advocated deeper integration in Bosnia, but Republika Srpska’s leaders in particular have refused to hand over functions to Sarajevo and frequently challenge its authority on a host of issues.

Concern over Mr Dodik’s rhetoric has increased in recent months, with reports that a Serb nationalist paramilitary group called Serbian Honour is operating in Republika Srpska with his approval, and an announcement that the region’s police would soon receive 2,500 new automatic rifles from Serbia.

“They took away our army, they won’t do it with our police,” local media quoted Mr Dodik as saying last month.

Analysts fear that Mr Dodik, who denies corruption allegations, could seek to destabilise Bosnia if he and his party faced defeat in elections this October.

He is a regular visitor to Moscow, and recent unconfirmed reports have said that Russian trainers may work with Bosnian Serb police at a new training centre in Republika Srpska.

After Montenegro joined Nato last year and Macedonia overcame a long-running political crisis, Republika Srpska is now seen as one part of former Yugoslavia where Moscow still has a foothold and potential to project influence.

Macedonia is now trying to end a 27-year dispute with Greece, which says its own region of the same name should have the sole right to use that moniker.

1 Coronavirus: Further two deaths in Republic as expert warns against ‘rush’ to ease restrictions
2 Changes to Covid-19 payments to be considered next week, Minister says
3 Army officers evacuated from Goma after weeks of delay
4 George Floyd death: Clashes and curfews in many cities as protests sweep US
5 Over 300 church groups unite for online Irish Blessing video
Real news has value SUBSCRIBE