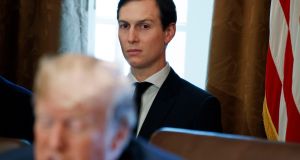 Jared Kushner, senior adviser and son-in-law to President Donald Trump, has lost his top-level security clearance in a blow to the Trump administration.

The development had not been entirely unexpected – the White House system of security clearance had come under renewed scrutiny with the departure of aide Rob Porter under a cloud of domestic abuse allegations three weeks ago. It emerged that Porter had been working in the White House despite not having been given full security clearance by the FBI.

Trump surprised many last Friday during a press conference with Australian prime minister Malcolm Turnbull, when he said that it was up to Kelly to make a decision on Kushner’s clearance. It has since been confirmed that the chief of staff decided on Friday to revoke top clearance for anyone whose background check had been pending since June 1st or earlier – including Kushner.

In practice, the development means that the 36-year-old senior adviser, who holds a range of portfolios in the Trump administration, will no longer be permitted to attend the president’s daily intelligence briefings. This is likely to have a major impact on his foreign policy role.

Kushner has taken a lead role in the Middle East peace process, as well as serving as a conduit between the administration and countries such as Saudi Arabia and China. Kelly’s decision means he will no longer have access to top classified material, significantly inhibiting his ability to shape policy.

Speculation has mounted about the reason for the delay in the issuance of full clearance to Kushner, though it is likely to involve his business connections. Kushner worked for his family’s real estate and media company before his appointment to the White House.

The Washington Post reported this week that at least four foreign governments had tried to use Kushner’s business ties as leverage over him.

Just months into the Trump administration, Kushner was forced to resubmit documents after he was found not to have disclosed the full extent of his meetings with foreign contacts in his initial application for security clearance.

Kushner’s meetings may also form part of the ongoing special counsel investigation by Robert Mueller into links between the Trump campaign team and Russia. Kushner, for example, attended the June 2016 meeting in Trump Tower during which members of the campaign team met Russian individuals on the pretext of receiving incriminating information about Hillary Clinton, according to Donald Trump jnr, the president’s son.

Despite the removal of the security clearance, Kushner is likely to retain a central place in the Trump administration. Speaking last Friday, Trump praised his son-in-law, even as he said it was up to Kelly to decide whether to revoke his clearance.

Kushner had been treated very “unfairly”, Trump said, highlighting his son-in-law’s role in trying to bring peace to the Middle East. “He’s a high-quality person. He works for nothing. No one ever reports that. But he gets zero,” he said, noting that Kushner and his daughter Ivanka do not accept a salary.

Further evidence that the Trump family will continue to exert significant influence on this White House emerged on Tuesday, when Brad Parscale, a close ally of Kushner, was appointed campaign manager for the president’s re-election campaign in 2020.

As Trump eyes a second term in the White House, the influence of his family on his political career shows no sign of waning.