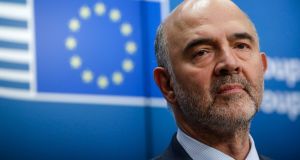 No matter how often it is batted away by any of our determined taoisigh, this one just keeps coming back. More persistent, and always in a slightly different form.

I remember sitting in a bar in Brussels in the 1990s with Oscar Lafontaine, then Germany’s Social Democratic finance minister, later maverick left politician, as he berated me over a pint. Ireland’s “immoral” capital tax largesse, for which he appeared to believe, I, hapless hack, was personally responsible, was a slap in the face to Germany.

It meant, he claimed, that his country was still funding through its EU contributions the miracle that was ungrateful Ireland’s phoenix-like rise, while we stole German industries.

And ever since then, every couple of years the same arguments, in broadly the same but more polite form, have resurfaced only to be beaten back by the EU’s unanimity requirement for taxation and an alliance usually involving the Benelux states, Sweden, Britain and Ireland.

Two news reports here in the last fortnight suggest it is firmly on the agenda yet again. The European Commission has suggested that one way of bridging the Brexit EU budget gap is through the introduction of an EU-wide digital tax, which it estimates could raise between €21 billion and €140 billion for EU coffers over seven years.

And the news agency Reuters has seen a draft plan that would see member states use a common model to tax large digital companies’ revenues based on where their users are located rather than where they are headquartered, at a common rate between 1 and 5 per cent.

The commission does not deny that it is working – indeed has been working for a while on a digital tax proposal, as instructed by ministers, but officials say any figures are evolving.

The target for now is the large companies, the Reuters figures suggest, those with revenues above €750 million worldwide and with EU digital revenues of at least €10 million a year.

The argument has been somewhat reframed in recent times. The digital economy has changed the playing field. Digital companies are growing faster than the economy as a whole: in the last seven years, the average annual revenue growth for the top digital firms was about 14 per cent, compared to about 3 per cent for IT and telecoms and 0.2 per cent for other multinationals.

And corporate tax frameworks in particular have not been able to keep up. “On average,” EU commissioner for economic and financial affairs  Pierre Moscovici pointed out in a recent speech, “domestic digitalised business models are subject to an effective tax rate of only 9 per cent.” This is less than half, he pointed out, of the effective tax rate of 21 per cent imposed on traditional business models.

Proponents of capital tax harmonisation in the EU, now led by France’s Emmanuel Macron, no longer make a case about an abuse of competitive advantage, but the more compelling one that all member states have a collective interest in tackling the black hole in all their tax revenues because the digital companies’ business model allows them to book profits not where they are made but in the most tax-efficient place.

The commission points to a July 2016 Eurobarometer survey estimating that 75 per cent of citizens want the EU to move forward on tax avoidance.

This is a qualitative change in the environment and one that should prompt a fundamental change in attitude in “tax haven” countries such as Ireland. And there has been a shift – Taoiseach Leo Varadkar now champions the cause of common international action against tax avoidance, led not by the EU, he says, because it is not big enough on the international stage, but by the Organisation for Economic Co-operation and Development.

The OECD has been working on the issue for some time via its Base Erosion and Profit Shifting Initiative, or Beps, which aims to come up with proposals for a method of taxation that limits offshoring of profits.

The commission is tick-tacking  with the OECD on the issue and officials expect it to take a broadly similar approach, although they worry that the organisation may find its ambition thwarted by US foot-dragging. Despite the fact that half of all US corporate profits from overseas are now located in tax havens such as Ireland, Luxembourg, the Netherlands, Switzerland and Jersey.

But US prevarication may suit Ireland whose current enthusiasm for taxing digital business and for the OECD, some suspect, may be less than wholehearted.

In the interim, the commission is this month going to propose short-term measures that will allow member states to plug the tax black hole. But despite its best intentions, there remains the road block of unanimity. Some hope that renewed political pressure could see Ireland and others  softening their opposition. But no-one should be holding their breath.