Several dead as ‘Beast from the East’ hits Europe

Blizzard-like conditions have hit parts of Leinster and Munster and heavy snow and strong easterly winds are expected to continue throughout the week. 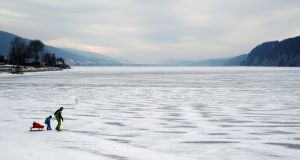 People enjoy a winter afternoon on the ice of the frozen Lake of Joux in Le Pont, Switzerland. Photograph: Denis Balibouse/Reuters 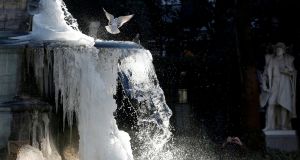 Ice partially covers the fountain of the Counts of Egmont and Hornes on a cold winter day in central Brussels, Belgium. Photograph: Francois Lenoir/Reuters 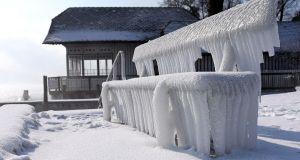 Icicles hang on a bench in a bay in the village of Attersee, Austria. Photograph: Wolfgang Spitzbart/AFP/Getty Images 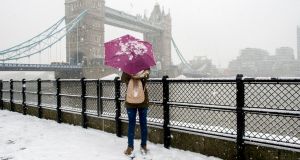 A tourist stops in the snow past Tower Bridge, London, Britain. Photograph: Will Oliver/EPA

Persistent snow and freezing conditions from a Siberian cold snap has badly affected transport and caused a handful of deaths across a swathe of Europe from Britain to the Balkans.

Several deaths have been attributed to the cold snap, including that of a 75-year-old man who fell through ice in the Netherlands, likely while skating.

Meanwhile, a 38-year-old man was found dead on a frozen river in northern Germany amid continuing sub-zero temperatures across the country, according to German news agency dpa.

In Denmark, a 54-year-old man who suffered from dementia was found dead in the snow on the Baltic Sea island of Bornholm, police said.

In southern Serbia, another man suffering from dementia was found frozen to death after he disappeared from his home two days ago.

An elderly man died of cold when he went out to collect wood near Maribor in Slovenia, authorities said. Temperatures in that country fell as low as –27 degrees Celsius.

In Britain, hundreds of schools were closed and there were delays on roads, railways and at airports on one of the coldest days the island has experienced at this time of year for almost three decades.

Temperatures fell to –12 degrees in some rural areas, while Britain’s weather service warned of up to 40cm of snow in higher areas of Scotland.

“It is the coldest air we have seen over the UK at this time of the year since around 1991,” Becky Mitchell, a meteorologist at Britain’s Met Office, said. “It is all tied in with the Beast from the East.”

In France, the national weather agency, Météo France, put a large part of the country on alert for dangerous levels of snow and ice, as well as violent wind. Urging people to limit their movement, Météo France said snowfall would continue until Friday.

Snowfall of up to 3.6ft blanketed all of Albania, including a rare accumulation in the capital, Tirana. Many schools in the countryside were closed on Wednesday.

Snow has blocked many roads and damaged power pylons across Albania, leading to power cuts in many rural areas.

In Kosovo, the education ministry closed all primary and secondary schools on Wednesday due to the extreme weather. Temperatures are expected to drop as low as –23 degrees in the territory.

Freezing weather also limited traffic and closed down schools in Croatia, with snow falling even along the Adriatic coast.

The cold snap saw a snowman built in St Mark’s Square in Venice, Italy, while snow delayed Formula One testing at the Circuit de Barcelona-Catalunya in Spain. – PA and AP