Agreement reached on voluntary basis, suggesting that some countries may not take part in the process 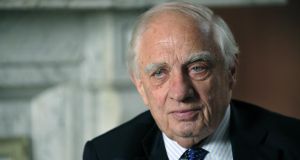 Peter Sutherland: said the migration crisis was a problem “which can only be dealt with collectively, not in isolation to one another”. Photograph: Aidan Crawley

EU leaders defended their decision not to back mandatory quotas for migrants at a summit of EU leaders, pledging to agree a plan to redistribute 40,000 migrants across the European Union by the end of July.

After a highly charged discussion that continued into the early hours of Friday morning, the European Council agreed to relocate 40,000 migrants who have arrived in Italy and Greece across the European Union over the next two years, although crucially they agreed to do so on a voluntary basis, prompting expectations that a number of countries may not take part in the process.

After the two-day summit, which was overshadowed by the continuing Greek bailout crisis, Taoiseach Enda Kenny said Ireland would consider the EU’s relocation proposal and would do what it could to help. Ireland, along with Denmark and Britain, has an automatic opt-out of the proposed legislation.

“At our meeting we also resolved to do more to address the factors that drive people to risk their lives to arrive in Europe. People are coming in from west Africa, from the horn of Africa and also through Libya, ” he said.

Yesterday, UN special representative for migration Peter Sutherland called on Ireland to waive its exemption from the relocation programme and accept an allocation of migrants. Describing the summit’s conclusions as “disappointing”, Mr Sutherland said the migration crisis was a problem “which can only be dealt with collectively, not in isolation to one another”.

After a meeting with Pope Francis in the Vatican, Mr Sutherland said the 20,000 resettlement target and 40,000 relocation target set by the European Union were relatively small, considering that the EU had a population of more than 500 million. “I would also point out that under a 1951 convention, every European country is individually obliged when they take in refugees to keep them,” he said.

German chancellor Angela Merkel said after the two-day summit that migration was “one of the greatest challenges that the European Union has had to face until now.” The EU’s response to migration should comprise different elements, including strengthening search and rescue operations, fighting people-trafficking and burden-sharing.

Germany, along with Sweden, accepts one of the highest percentages of migrants each year and has argued that there should be a more equitable distribution of asylum-seekers across the bloc. However member states are reluctant to change the Dublin convention which states that migrants arriving in the European Union should seek asylum in the country where they first arrive.

European Commission president Jean-Claude Juncker, who proposed the contentious mandatory relocation proposal earlier this month, said he would have preferred binding rules, but stressed that it was “the result”, not the method of getting there, that was important.

“The fact remains that the commission proposal remains on the table of the legislature and I have confidence in the wisdom of the Luxembourg presidency that by the end of July we will be able to achieve those results.”

While a number of east European states in particular voiced their opposition to the mandatory relocation plan at the summit, British prime minister David Cameron also signalled his disagreement with the relocation proposal, warning it could be “counterproductive” by encouraging more people to travel from troubled regions of Africa and the Middle East to Europe. Britain has already said it will not opt-in to any EU resettlement or relocation plan.

Medecins sans Frontieres’ Aurelie Ponthieu criticised the EU’s latest migration proposals agreed at the summit. “Policymakers are failing to see that the majority of people have no choice but to come to Europe, fleeing conflict, crisis or chaos in Libya,” she said. “Even without compulsory relocation, reception capacities and services for people arriving in Greece and Italy will urgently need to be improved to deal with people humanely.”