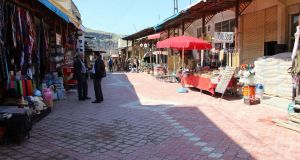 Hasankeyf’s main thoroughfare will be submerged when the Ilisu dam is completed. Photograph: Stephen Starr 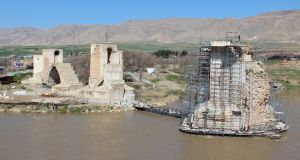 These 850-year-old bridge piers are being reinforced to maintain their shape aftey they are submerged by the reservoir. Photograph: Stephen Starr 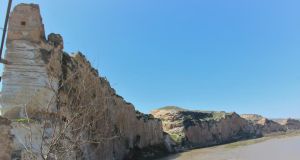 Opponents of the Ilisu dam say its reservoir will reach the height of the castle window seen on the upper left. Photograph: Stephen Starr

After more than a decade of controversy, kidnappings and international opposition, the €1.6-billion Ilisu dam, 80km downstream, is expected to be completed next year. A reservoir submerging 80 per cent of the town under 64m of water will be filled in 2019.

This month, Hasankeyf’s 650-year-old Zeynel Bey tomb is set to be moved 2km uphill to where a settlement for displaced residents is being constructed, in the face of a range of concerns. “There’s an extreme lack of transparency, particularly around this project,” Crofoot says.

The stunning 900-tonne mausoleum was built for the son of a 15th century ruler and moving it, though fraught with challenges, may be the only way to save it for future generations.

The tomb relocation marks what may be the beginning of the end for this 12,000-year-old settlement in southeast Turkey, a “living museum of epic proportion”, in the words of National Geographic magazine.

The town of 3,200 inhabitants is replete with extraordinary relics from the past. Neolithic caves dug into the Tigris river’s limestone banks once sheltered persecuted communities; a centuries-old zawiya or religious school points to its Islamic significance; a cliff-side citadel overlooking the Tigris served as a lookout for potential enemies crossing a valley that stretches north.

Hasankeyf’s singular importance, however, lies in the fact that when the Ak Koyunlu tribal federation that ruled the region in the 15th century collapsed, Hasankeyf’s new Ottoman rulers left the town untouched. “This is a city frozen in time,” says Crofoot, who lives in the town and is one of the people behind the website Hasankeyf Matters, “one of the best-preserved medieval cities in the Middle East.”

With the reservoir, expected to stretch to 135km , the citadel’s limestone walls may collapse once exposed to water. The town’s iconic millennia-old bridge piers would also be completely submerged. For these reasons and more, the conservation group Europa Nostra ranks Hasankeyf among the most endangered heritage sites in Europe.

A thousand kilometres downstream in southern Iraq, the Mesopotamian marshes also face the threat of untold damage caused by the Ilisu dam. This region has seen the return in recent years of communities such as the Marsh Arabs, whose land was drained by Saddam Hussein in the 1990s.

Preservationists have appealed to the Turkish government and the State Hydraulic Works, the forces behind the dam, to cease operations, though a 2013 ruling by the Turkish supreme court halting construction has since been overturned. The controversy led to several European institutions to back away from financing the dam.

For decades the visitors that flocked to the town provided an important tourist economy for locals. A colourful thoroughfare that leads to the citadel today displays crafts, souvenirs and handmade goods. It will be submerged by the reservoir, as will a campsite on the edge of town and Hasankeyf’s pair of timeworn hotels.

Ozgur Dagtekin sells shawarma sandwiches on the souvenir strip and expects the flooding of Hasankeyf to initiate a break with history. “Everything we inherited will change. Many people don’t look favourably on the dam and on moving to the [new settlement on the] other side. The old will probably wait to die, the young will just move away,” he says.

Turkey’s state house-building agency is currently constructing homes and facilities on a hillside ten minutes from Hasankeyf to rehouse residents whose homes and businesses will be submerged. Between 600 and 700 houses are expected to be finished next year and several municipal agencies are already in place on the hillside.

The home appropriation process has been finished and people received their pay-outs in 2015, though some locals refused the money. And with inflation running at 10 per cent and the Turkish lira having lost a third of its value against international currencies since then, even those who took the payments are set to lose out.

For tailor Yuksel Yilmaz, it’s the uncertainty that’s troubling. “In new Hasankeyf maybe there will be work, maybe there won’t. The issue is that we have no idea,” he says. Concern also surrounds the fact that the new settlement will be sandwiched between the reservoir and a new highway.

For the Turkish government, a project that has dragged on for more than 60 years may finally be about to come to fruition. The dam building and operating, they say, will provide jobs for a million people and would guarantee water for urban centres and agriculture for the southeast region for decades to come. Local authorities last year opened a museum in the new town to house precious artefacts, but according to some it lies empty.

To replace the tourist sites submerged by the reservoir, authorities plan to build attractions such as a gondola lift spanning the lake, water sports facilities and “historical scuba diving” around the submerged 12th century bridge piers. Facilities in New Hasankeyf are said to be modern and larger than some residents’ expropriated homes.

On top of the local economic and conservation concerns, Hasankeyf’s endgame is playing out against a background of deep political instability. Kurdish separatists have pledged to target dams in the southeast as they are seen as symbols of the government enforcing its will against Kurds.

In August 2014 two dam workers were kidnapped, leading to mass resignations that further delayed construction; a year later, several employees came under attack at the dam site. Elsewhere in the Kurdish-majority southeast, thousands of civilians have been displaced by violence, meaning that the fate of an ancient town is perhaps not at the fore of people’s day-to-day worries.

For many Kurds, politics has long since been a distraction from getting on with daily life.

The fact that the dam’s operational lifespan is only 60 to 70 years because of the anticipated build-up of millions of tonnes of silt and sediment, adds to a sense of disempowerment.

“My store is here on the highway because that’s where the cars are passing, and it’s where some stop,” says grocer Yusuf Agalday. “If we go over there,” he says, pointing his eyes to the hill, “what are we going to do?”