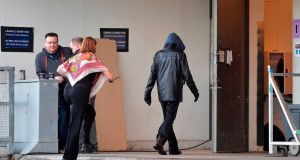 A person supposedly being the US artist Bob Dylan wearing a black jacket and a hoodie is photographed while entering the backstage door at Stockholm Waterfront on Saturday. Photograph: AFP/Getty Images 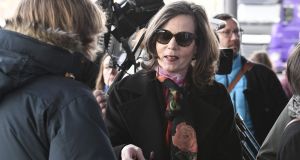 Permanent Secretary of the Swedish Academy Sara Danius is seen in line at the entry to a concert with US songwriter and singer Bob Dylan at Stockholm Waterfront on Saturday. Photograph: AFP/Getty Images 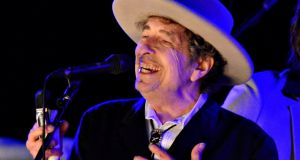 US singer-songwriter Bob Dylan photographed performing in the UK in 2012. Photograph: Reuters

Bob Dylan has finally received his Nobel Prize in Literature, almost six months after he became the first musician to win the award.

The US singer-songwriter collected the prize’s diploma and medal on Saturday ahead of a concert in Stockholm, a member of the Swedish Academy confirmed.

He said the 75-year-old received the award during a small gathering on Saturday afternoon at a hotel, with just academy members and Dylan’s staff present.

Dylan himself did not mention anything about receiving the Nobel at his concert after months of discussion on whether he would collect the prize in person.

The Like A Rolling Stone singer took more than two weeks to respond to the announcement that he had been awarded the prize in October, finally saying he had been left “speechless” by the win.

He was named the winner of the prestigious accolade for “having created new poetic expressions within the great American song tradition”.

Dylan declined the invitation to attend the traditional Nobel Prize banquet and ceremony in December, citing other commitments.

He will perform a second gig in Stockholm on Sunday night.