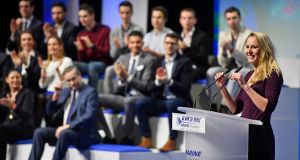 The centrist presidential candidate Emmanuel Macron has angered the French right by calling France’s 132-year colonisation of Algeria a “crime against humanity.”

Mr Macron made the comment in an interview with Echorouk TV during a visit to Algiers earlier this week. Fifty-five years after Algeria won independence, the subject remains extremely sensitive on both sides of the Mediterranean.

Mr Macron was attempting to correct the impression created by an interview last November, in which he referred to “elements of civilisation” as well as “barbaric elements” of colonisation.

Then, as now, many French and Algerians would rather take offence at one aspect of Mr Macron’s discourse than view it as a nuanced whole.

In 2005, the conservative party now known as Les Républicains (LR) passed a law recognising “the positive role of the French presence overseas”. It was later abrogated by the socialists. The debate returned with a vengeance on Thursday.

“I think it is inadmissible to glorify colonisation,” Mr Macron told Echorouk. “Some wanted to do that in France, more than 10 years ago. Never will you hear me say such things.”

Colonisation “is a crime against humanity, real barbarity”, Mr Macron continued. “It is part of the past that we must face, presenting apologies to those against whom we committed these acts.”

The LR presidential candidate, François Fillon, condemned Mr Macron’s “detestation of our history” at a campaign rally on Wednesday night, calling it “unworthy of a candidate for the presidency of the Republic”. Last summer, Mr Fillon said “France is not guilty for having wanted to share her culture with the peoples of Africa”.

French leaders are habitually more contrite when visiting Algeria than at home. On a state visit in 2012, president François Hollande said French colonisation of Algeria was “profoundly unjust and brutal”. He “recognised the suffering inflicted on the Algerian people”.

On a trip to the Algerian city of Constantine in 2007, then president Nicolas Sarkozy – now considered the “godfather” of Les Républicains – said colonisation was “unjust by nature . . . an undertaking of enslavement and exploitation” and the source of “unforgiveable mistakes and crimes”.

Yet Mr Macron is the first French leader to speak of “apologies” or “crimes against humanity”.

Marion Maréchal Le Pen, a member of the National Assembly and the niece of Marine Le Pen, the presidential candidate for the anti-immigrant, Islamophobic Front National (FN), called Mr Macron the “candidate of repentance”.

The FN vice-president, Florian Philippot, accused Mr Macron of sowing discord: “How can you facilitate the assimilation of immigrant youths when you tell them that their new country is guilty of having committed crimes against humanity towards their parents and grandparents?”

The sententious tone of FN officials coincided with a poll of nearly 16,000 French people, conducted by the Sciences Po study centre Cevipof and published by Le Monde on Thursday.

It placed Ms Le Pen firmly ahead of 10 other candidates in the first round of the election on April 23rd, with 26 per cent of the vote. Mr Macron is at 23 per cent and Mr Fillon at 18.5 per cent. The top two candidates will face a second round run-off in May.

Mr Fillon’s score has fallen nearly 10 percentage points since he won the LR primary last November. On February 1st, he asked party parliamentarians to give him 15 days to resolve a financial scandal over payments to his wife and children.

The financial prosecutor’s office announced on Thursday that it has received a police report on the case and does not intend to drop it at present.

Since it was revealed that his wife and children received more than €1 million in dubious salaries, it has become impossible for Mr Fillon to demand integrity and sacrifice. He has instead “Sarko-ised” his campaign, focusing on crime and security.

Hours after lunching with Mr Sarkozy, Mr Fillon told the rally on Wednesday night that he would lower the age of criminal responsibility to 16, a Sarkozy promise in his own failed primary campaign.