South African police ‘killing each other’ over confiscated drugs

Seized contraband allegedly channelled to streets of Johannesburg for sale 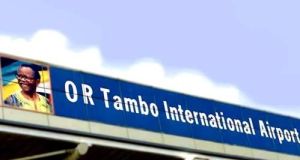 Johannesburg’s Oliver Tambo international airport, where police are allegedly confiscating drugs and selling them on

South African police officers working at Johannesburg’s Oliver Tambo international airport are engaged in a war over drugs that the authorities are confiscating from traffickers, parliament’s police committee has been told.

The allegation was made on Wednesday during a briefing for MPs by the Independent Police Investigative Directorate (IPID) on high-profile cases it is investigating, which include torture, deaths in custody, and the killing of police officers.

We hope to crack the case in the near future. Unfortunately, we can’t say how long this investigation is going to take us

IPID executive director Robert McBride said members of the South African Police Service (Saps) and the Directorate for Priority Crime Investigating (DPCI) were going as far as killing each other to get their hands on the contraband confiscated from drug mules flying into the country.

Chief of IPID investigations, Matthews Sesoko, told the MPs that an alleged murder-suicide involving two policemen – one from each unit — had led the directorate to investigate what was going on at South Africa’s busiest airport.

“We hope to crack the case in the near future. Unfortunately, we can’t say how long this investigation is going to take us, but this came out as a result of the death of these two officers,” he said.

Mr Sesoko added: “We recently went to view [CCTV] footage at OR Tambo, and it is appalling to see what members of Saps and DPCI get up to in dealing with drugs,” he said.

It was also alleged that when drugs were confiscated at the airport’s international arrivals area, an unspecified number of officers would illegally shift a portion of what was taken back through domestic arrivals.

It is believed that these drugs are then channelled on to the streets of Johannesburg for sale.

It was alleged that when drugs were confiscated at the airport’s international arrivals area, an unspecified number of officers would illegally shift a portion of what was taken back through domestic arrivals

It was revealed that Irish-born forensic investigator Paul O’Sullivan was a complainant in the IPID investigation into Mr Phahlane, and was providing the body with information and sources.

Mr O’Sullivan rose to prominence in the mid-2000s for his role in building the case against former national police commissioner Jackie Selebi that led to his conviction on corruption charges in 2010.

Mr Selebi received a 15-year jail term upon his conviction, although he was released from jail on medical parole in 2012 and died three years later.

Mr Phahlane has strongly denied any wrongdoing and has publicly said he is unhappy with Mr O’Sullivan’s role in the investigation. He has launched a court application to prohibit Mr O’Sullivan’s further involvement.

Mr Sesoko said that while it was not up to the IPID to say whether Mr Phahlane was innocent or guilty‚ there was enough evidence to conclude that “something does not add up”.