Dressing like a centurion and ‘messy’ eating banned in Rome clampdown 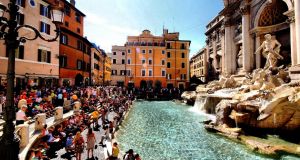 Dressed as a gladiator, Remi Sanz, a visitor from Spain, was unaware that his outfit might land him in trouble as he hung around Rome’s famous Trevi Fountain on Friday morning.

Authorities in the Italian capital have now enforced a slew of rules, updated from legislation drafted in 1946, as they seek to clamp down on uncouth behaviour that has long been a source of frustration. One of the measures is a permanent ban on modern-day centurions – men who dress up in tunics and leather breastplates and make money by posing for photos.

Sanz is not a centurion – he is in Rome with a group of friends for his stag do – but he might be mistaken for one.

“We just dressed up like this for fun,” he said. “So long as I don’t make a disturbance, I guess I’ll be okay. The bad thing would be to get drunk while dressed like this. I can understand such rules and I’m glad to know about them now.”

But it wasn’t just Sanz. The Trevi Fountain area was full of people unwittingly committing transgressions, particularly those flouting the ban on “messy” eating near monuments.

“This is against the law now?” asked Giuseppe, a visitor from central Italy, as he ate pizza while standing by a church opposite the fountain. “I didn’t know, but I think it’s a good thing. They have a similar law in Venice. You shouldn’t be eating by monuments and making a mess.”

Clara Jankovitch, a tourist from Hungary, was perched on the steps of the church enjoying an ice-cream.

“I can understand pizza and sandwiches, but surely an ice-cream is okay? Look around, everyone is eating one,” she said.

It is unclear whether people will be served with a penalty for such infractions or simply get a ticking off from the tourist police patrolling historic sites, but Rome authorities have promised “severe fines” for those caught taking a dip in the city’s fountains – a frequent occurrence during the summer.

Other rules include a ban on wheeled suitcases and buggies being dragged down historic staircases, walking around bare-chested and pub crawls. The authorities are also taking aim at “nuisance drunks” and people who sing on public transport, as well as those who wrap their mouths around the nozzles of the city’s drinking fountains. Illegal street trading and ticket touting outside tourist sights have also been banned, as has the Roman custom of hanging laundry out to dry between neighbouring buildings.

“Old regulations have been updated to adapt to the needs of a modern society,” said Marco Cardilli, deputy chief of staff and security delegate at Rome’s council. – Guardian