Fifth arrest made over attack on gay couple on London bus

A fifth arrest has been made in connection with the homophobic attack of a couple on a London bus. The two women say they were assaulted and robbed after refusing to kiss each other on demand for a group of young men. Video: BBC 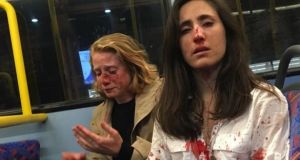 Both women were taken to hospital for treatment to facial injuries after the incident. Photograph: Melania Geymonat Facebook page

A fifth arrest has been made in connection with the homophobic attack of a couple on a London bus.

Melania Geymonat and her girlfriend, Chris, had been travelling on a bus in north London, and say they were attacked after refusing to kiss each other on demand for a group of young men. The attack is being treated as a hate crime by the Metropolitan police.

The alleged assault – during which a phone and a bag were stolen – happened in the early hours of May 30th.

Four other males between the ages of 15 and 18 have already been arrested on suspicion of robbery and aggravated grievous bodily harm and are being questioned separately.

Speaking to the BBC on Friday, the couple said that they would not be frightened into hiding their sexuality after the attack.

“I was and still am angry. It was scary, but this is not a novel situation,” said Chris. “I’m not scared about being visibly queer. If anything, you should do it more.

Describing the incident in a Facebook post on Friday, Ms Geymonat said she and her girlfriend were subjected to homophobic abuse while being beaten up. “They started behaving like hooligans, demanding that we kissed so they could enjoy watching, calling us ‘lesbians’ and describing sexual positions – The next thing I know is that Chris is in the middle of the bus fighting with them.

“The next thing I know is I’m being punched. I got dizzy at the sight of my blood and fell back. I don’t remember whether or not I lost consciousness.”

After a photograph of the couple’s bloodied faces went viral on Friday, politicians condemned the attack.

Theresa May said: “This was a sickening attack and my thoughts are with the couple affected. Nobody should ever have to hide who they are or who they love and we must work together to eradicate unacceptable violence towards the LGBT community.”

The Labour party leader, Jeremy Corbyn, said: “We must not, and will not, accept this homophobic and misogynist violence in our society. Solidarity to Melania and Chris, and to all in the LGBT+ community for everything they endure for simply being who they are.”–Guardian

1 Urgent report on Dublin eviction ordered by Deputy Garda Commissioner
2 Inside the O’Brien Fine Foods factory in lockdown Kildare
3 A million trees, including 400,000 oaks, to be destroyed this week
4 ‘It was pitch black’ - Rescued teenager describes night afloat with her cousin in Galway Bay
5 Cousins went paddle boarding at Furbo as usual location was cut off due to Covid-19
Real news has value SUBSCRIBE