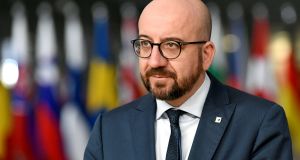 Charles Michel: had being trying to put together a working majority in parliament since the right-wing nationalist New Flemish Alliance (NVA) walked out nine days ago. Photograph: Piroschka Van De Wouw/Reuters

Belgium’s Francophone liberal prime minister Charles Michel has resigned in the wake of a bitter falling out with his erstwhile Flemish coalition partner. He told MPs he would offer his resignation to the king after socialists and greens tabled a motion of no-confidence in his minority government on Tuesday .

Mr Michel has being trying to put together a working majority in parliament since the right-wing nationalist New Flemish Alliance (NVA) walked out nine days ago.

The party objected to Mr Michel’s support for what it claimed was a legally binding UN compact on migration, which was approved at a summit of 180 states in Marrakesh last Monday. The Global Compact for Safe, Orderly and Regular Migration is a first attempt at the UN to agree a common global approach to migration but was seen by populists as too sympathetic to migrants.

Bart de Wever, leader of the NVA and the mayor of Antwerp, attacked the compact which he claimed, although non-binding, “will serve as an argument in court”.

The NVA, which supports the break-up of Belgium, is under strong electoral pressure from the far-right Vlaams Belang. It argued that the compact would undermine the government’s tough stance against illegal migrants.

Core to the UN’s vision is the view that migration was integral to human experience throughout history, a source of “prosperity, innovation and sustainable development in our globalised world”. Mr Michel attended the summit and signed the declaration on Belgium’s part.

Objectors claim that although not legally binding, the compact will somehow acquire legal force. They argue it is “soft law” that might one day be used to press governments into hard commitments, such as acknowledging a “human right” to migration or expanding the grounds for asylum.

The US was first to pull out followed by Australia, Israel, Poland, Slovakia, the Czech Republic, Austria, Switzerland, Bulgaria, Latvia and the Dominican Republic, who have either publicly disavowed the pact or notified the United Nations they were not participating.

Mr Michel’s  resignation, and the collapse of his experimental coalition which came to power in 2014, may force Belgium into an early election – regional, federal and European elections had been scheduled here for May.

Belgium’s complex, cross-community power-sharing political system has struggled over the years to reconcile the parties in both Francophone and Flemish communities and preserve the integrity of the country. Elections tend to polarise politics further, and the country is set for a bumpy few months.