UK ramps up planning and logistics for no-deal Brexit

Ad campaigns will advise firms of necessary steps, with army preparing for contingencies 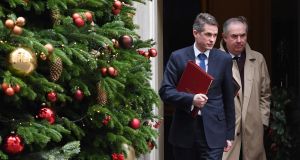 Theresa May’s cabinet has agreed to ramp up planning for a no-deal Brexit, telling government departments to make contingency planning their top priority. The plans include chartering ferries for supplies of food and medicines and putting thousands of armed troops on standby to help with any disruption.

At the end of a 2½-hour meeting in Downing Street, ministers agreed to implement no-deal planning in full.

“Cabinet agreed that with just over three months from our exit from the EU, we have now reached the point where we need to ramp up these preparations. This means we will now set in motion the remaining elements of our no-deal plans. Cabinet also agreed to recommend businesses ensure they are similarly prepared enacting their own no-deal plans,” the prime minister’s official spokesman said.

The government will contact businesses directly to advise them on how to prepare for the consequences of leaving the EU without a deal and use television advertising and social media to inform the general public. Defence secretary Gavin Williamson said he had not yet received any formal requests from government departments for help from the armed forces in the event of a no-deal Brexit.

“What we are doing is putting contingency plans in place, and what we will do is have 3,500 service personnel held at readiness, including regulars and reserves, in order to support any government department on any contingencies they may need,” he said.

MPs will vote on the prime minister’s Brexit deal in mid-January but it appears unlikely to win a majority without changes to the Northern Ireland backstop. EU leaders told Mrs May in Brussels last week that they could offer clarifications about the backstop but that the text of the withdrawal agreement could not be renegotiated or amended.

Conservative MP Nick Boles, who wants Britain to remain in the customs union and the single market, said on Tuesday that he would resign the party whip and vote with Labour rather than allow a no-deal Brexit to happen.

Labour’s shadow Brexit secretary Keir Starmer said he did not believe the prime minister would ever authorise a no-deal Brexit because it would leave every part of Britain worse off.

“It would also mean no common security arrangements in place and a hard border in Northern Ireland. It would be catastrophic for the UK. That’s why no deal has never truly been a viable option. It is a political hoax, and deep down, deep down, I think the government, and this prime minister, knows it,” he said.

“I know from personal experience how seriously she takes security arrangements for the United Kingdom. To put us in a position where that could be jeopardised is not something that, deep down, I think she thinks could possibly be acceptable for this country.”

Labour activists who favour a second referendum have called on Jeremy Corbyn to convene a special conference to agree the party’s plans for Brexit over the next few weeks. Mr Corbyn said on Monday that he was tabling a vote of no confidence in the prime minister over Brexit but he has resisted calls to table a no-confidence vote in the government itself.