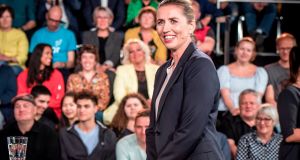 Tacking left on welfare and right on immigration looks likely to pay off for Denmark’s Social Democrats, who are widely expected to return to power this week as voters desert the centre-right government and the far right.

A poll this weekend predicted the centre-left party, led by Mette Frederiksen, will be the country’s largest with about 27 per cent of the national vote after the election on Wednesday, while the “red bloc” of left-leaning parties it leads is on course for more than 55 per cent.

The outgoing centre-right government of the prime minister, Lars Løkke Rasmussen, is forecast to finish a distant second on about 18 per cent, with support for the far-right Danish People’s party predicted to collapse to barely 11 per cent: half its score in the 2015 vote and a repeat of the DPP’s poor performance in the European elections last month.

The projected results follow the adoption by Denmark’s mainstream parties of hardline anti-immigration policies previously the preserve of the far right, which immigrants and human rights campaigners believe have led to a rise in racist abuse and discrimination.

Mr Rasmussen’s Liberal party and the Social Democrats have both backed widely criticised measures on immigration, arguing they are needed to protect Denmark’s generous – if increasingly creaking – welfare system and to integrate migrants and refugees already in the country.

But discrimination cases are up and the number of racially or religiously motivated hate crimes registered by Danish police – which is likely to be lower than the actual figure because not all incidents are reported – surged to 365 in 2017 from 228 the year before.

Louise Holck, the deputy executive director of the Danish Institute for Human Rights, said: “Politicians are moving very close to the boundaries of human rights.”

With a welter of tough new legislation aimed at discouraging further non-European immigration, the immigration minister, Inger Støjberg, installed a counter on the ministry’s website showing the government had tightened the law 114 times.

Many measures, some of which have been sharply criticised by Danish human rights campaigners and the UN refugee agency, have been supported not just by the DPP – a key ally propping up Mr Rasmussen’s minority government – but also by the Social Democrats.

The centre-left party has repeatedly rejected criticism of this approach, saying it was necessary. “You are not a bad person just because you are worried about immigration,” Ms Frederiksen said during a debate earlier this month.

Polls suggest, however, that the centre-left party’s tough stance swayed some voters to switch their support back from the populist DPP, which also faces a stiff challenge from two new small far-right parties, including Stram Kurs, which wants Islam to be banned and Muslims deported.

The Social Democrats have also won support by promising to increase public spending due to widespread anger in Denmark at what many voters see as the gradual erosion of the welfare state.

Cuts to healthcare services have led to the closure of one-quarter of state hospitals in the past decade, and one recent survey showed more than half of Danes did not believe the public health service offered the right treatments, prompting more than one-third to take out private health insurance, compared with 4 per cent in 2003.

Other cuts over the past 10 years have led to the closure of about one-fifth of state schools, while spending per person on services such as care homes, cleaning and rehabilitation after illness for the over-65s has fallen by one-quarter.

Ms Frederiksen has promised to raise public and welfare spending by 0.8 per cent a year over the next five years, making businesses and the wealthy pay more through higher taxes and partially rolling back some recent pension changes. – Guardian