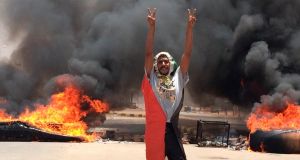 A protester flashes the victory sign in front of burning tires and debris near the army headquarters in Khartoum, Sudan, on Monday. Photograph: AP

Sudan’s military leaders have provoked fears that they are abandoning plans to pass power to civilians by announcing they will hold earlier than expected elections in an apparent push to consolidate power.

The move by the leaders of the transitional military council has undermined the hopes of millions of Sudanese that months of demonstrations against former president Omar al-Bashir might open a path to democracy.

The military council – which took power in April, ending Mr Bashir’s 30 years of autocratic rule – said on Tuesday that elections would now be held within nine months and not according to a previous timeline of two to four years.

The shortened timescale will leave little chance to rebuild political structures and a civil society that were crushed under Mr Bashir’s 30-year rule and will make it easier for the former regime to keep power, experts said.

In a statement broadcast on state television, Lieut Gen Abdel Fattah al-Burhan, the head of Sudan’s transitional military council, said the army had decided to “stop negotiating with the [opposition] Alliance for Freedom and Change and cancel what had been agreed on”. The only way to rule Sudan was through the “ballot-box”, he said.

The announcement followed a deadly assault on pro-democracy protesters by the council’s troops on Monday as they cleared the site of a two-month sit-in at the defence ministry in Khartoum, the capital. At least 35 people were killed in the attack.

Opposition leaders immediately called for a return to mass civil disobedience to force the military council from power, but troops from a feared army militia, the Rapid Support Forces, filled the streets of the capital on Tuesday, limiting people’s movement.

At the same time local mobile operators, including South Africa’s MTN and Zain from the United Arab Emirates, blocked access to the internet, complicating communications for activists, according the Netblocks, a UK-based organisation that tracks internet disruptions.

The move left many citizens sensing a once-in-a-generation opportunity to reshape Sudan’s future, even as suspicions lingered over the intentions of the military leaders, many of whom had served Mr Bashir loyally for decades.

Their hopes are now hanging by a thread, analysts said. “The decision by the TMC to call a snap election is designed to short-circuit the transition [and] reinstall the army with quasi-legitimacy,” said Rashid Abdi, an independent Sudan expert. “The army is unilaterally opting out of the consensual process.”

Despite initial promises to hand power to a civilian administration, negotiations between the military and leaders of the opposition movement stalled over the army’s role. During the talks, the opposition alliance had called for a four-year, civilian-led transition to allow time to rebuild state institutions, which were hollowed out during Mr Bashir’s 30-year rule, before elections would take place.

That time would needed to dismantle the remains of Mr Bashir’s powerful “deep state” and create an environment conducive for free elections, said Dame Rosalind Marsden, a former UK ambassador to Khartoum, who also served as the EU special representative to Sudan and South Sudan from 2010 to 2013.

“Quick elections sound good, when in fact it is the exact opposite,” she said. “It would be letting the old regime back in through the back door.”

Tibor Nagy, the US assistant secretary of state for African affairs, on Monday condemned the deadly attack on protesters and warned against a fast-tracked transition. “A rushed election or transition to a technocratic [government] that does not include the main opposition coalition will not suffice,” he said in a statement posted on Twitter.

But US influence in Sudan is waning. In his announcement, Gen Burhan said the elections would take place under “regional and international supervision”, in what analysts suspected was a reference to Saudi Arabia, the United Arab Emirates and Egypt, which have all expressed support for the military leaders since they seized power.

He expressed “regret” for those protesters killed in Monday’s violence and promised an investigation but did not say military forces were responsible. – Copyright The Financial Times Limited 2019