Donald Trump and Queen Elizabeth II hailed the bonds between the US and the UK after the US president was feted with a day of pomp designed to bolster an alliance strained by discord over Brexit and China. Video: Reuters 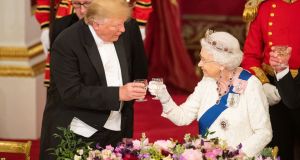 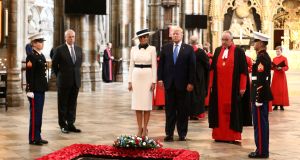 US president Donald Trump and First Lady Melania Trump are seen at Westminster Abbey as part of their state visit in London. Photograph: Simon Dawson/Reuters 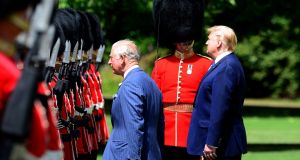 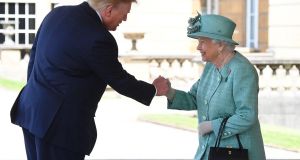 US president Donald Trump has praised Queen Elizabeth II and said shared values would unite the United States and the United Kingdom for years to come .

“That young mechanic was the future queen - a great, great woman,” Trump said of the queen at a state banquet at Buckingham Palace after recounting Elizabeth’s contribution to the World War Two effort.

Earlier, Mr Trump tweeted a “big trade deal is possible once UK gets rid of the shackles”.

“The bond between our nations was forever sealed in that great crusade,” Trump said.

“As we honour our shared victory and heritage we affirm the common values that will unite us long into the future; freedom, sovereignty, self determination, the rule of law and reference for the rights given to us by almighty God.”

Mr Trump said the queen embodied “the spirit of dignity, duty, and patriotism that beats proudly in every British heart”.

He said: “From the Second World War to today, Her Majesty has stood as a constant symbol of these priceless traditions.

“She has embodied the spirit of dignity, duty, and patriotism that beats proudly in every British heart.

“On behalf of all Americans, I offer a toast to the eternal friendship of our people, the vitality of our nations and to the long cherished and truly remarkable reign of her majesty, the queen. Thank you.”

In her speech the queen said the US and the UK face “new challenges” in the 21st century, and stressed the bonds between the two countries in her speech at the state banquet in Buckingham Palace on Monday night.

“As we face the new challenges of the 21st Century, the anniversary of D-Day reminds us of all that our countries have achieved together,” she said

“After the shared sacrifices of the Second World War, Britain and the United States worked with other allies to build an assembly of international institutions, to ensure that the horrors of conflict would never be repeated.

“While the world has changed, we are forever mindful of the original purpose of these structures: nations working together to safeguard a hard-won peace.”

The queen also mentioned the US and UK’s “strong cultural links and shared heritage” and said the two nations were “bound by the strength and breadth of our economic ties”.

She continued: “Mr President, as we look to the future, I am confident that our common values and shared interests will continue to unite us.

“Tonight we celebrate an alliance that has helped to ensure the safety and prosperity of both our peoples for decades, and which I believe will endure for many years to come.”

The queen finished by inviting the room to raise a toast to the “continued friendship between our two nations, and to the health, prosperity and happiness of the people of the United States”.

The banquet is the final event of day one of US president Trump’s state visit to the UK.

....Fake News will be working hard to find them. Great love all around. Also, big Trade Deal is possible once U.K. gets rid of the shackles. Already starting to talk!

The Queen, President Trump and the First Lady view a display of items from the Royal Collection illustrating the enduring relationship between the US and the UK. #USStateVisit pic.twitter.com/gPuI5Ziab6

In an earlier tweet Mr Trump said, a “big trade deal is possible once UK gets rid of the shackles” following the day’s events where he met various members of the UK’s royal family.

Mr Trump said on Twitter: “London part of trip is going really well. The Queen and the entire Royal family have been fantastic. The relationship with the United Kingdom is very strong. Tremendous crowds of well wishers and people that love our Country.”

He added, “Haven’t seen any protests yet, but I’m sure the ....Fake News will be working hard to find them. Great love all around. Also, big Trade Deal is possible once UK gets rid of the shackles.” [In apparent reference to Brexit]

The Duke of Sussex, who was at the private lunch earlier, will be noticeably absent, as will the Duchess of Sussex who is on maternity leave, looking after their four-week-old son Archie.

Charles, who had tea with Mr Trump earlier on Monday, is seated next to Mrs Trump, while Camilla is on the other side of the president and next to US ambassador Woody Johnson.

William is between the UK prime minister Theresa May and Mr Johnson’s wife Suzanne Ircha. Kate is seated between US secretary of the treasury Steven Mnuchin and the Lord Mayor of London Peter Estlin.

The president’s daughter and adviser Ivanka is seated between the Countess of Wessex and International Trade Secretary Liam Fox, while Ivanka’s husband Mr Kushner, a senior adviser to Mr Trump, has the Princess Royal on his right and Mark Carney, governor of the Bank of England, on his left.

But Mr Trump’s grand occasion was more trade and business than showbusiness.

Earlier on Monday, the queen greeted Mr and Mrs Trump in the West Terrace of Buckingham Palace.

Mr Trump inspected the guard of honour with the Prince of Wales and visited Westminster Abbey where he laid a wreath in honour of the two World Wars and more recent conflicts, as is tradition with a state visit.

Following the visit to Westminister Abbey, Charles and the Duchess of Cornwall welcomed Mr Trump and First Lady Melania in the garden for afternoon tea at their official residence, Clarence House, at 4pm.

On Monday morning, Mr Trump went on the offensive against the mayor of London, so-called “fake news” and China before meeting Queen Elizabeth at Buckingham Palace.

The US president wasted little time in taking aim at some familiar targets as he began his three-day state visit to the UK.

As he touched down on Monday he branded London Mayor Sadiq Khan a “stone cold loser” in a Twitter tirade.

He also appeared to use some downtime before meeting the Queen to watch TV and berate both “fake news” CNN and China.

Following his criticism of Mr Khan, the mayor’s office fired back, saying Mr Trump was offering “childish insults which should be beneath the President of the United States”.

The spat came at the beginning of a visit that will see Mr Trump take part in a number of royal engagements, as well as meeting Theresa May in her final days as British prime minister.

Mr Trump had already created a considerable degree of political turbulence ahead of the visit, with comments in recent days on the Tory leadership race, Brexit and the Duchess of Sussex.

Speaking to reporters just before he left the US, he praised Boris Johnson and Nigel Farage, talked up the prospect of a Brexit trade deal and rebuked Mr Khan, who on Sunday described the president as “just one of the most egregious examples of a growing global threat” and compared the language he has used to that of the “fascists of the 20th century”.

As he landed he fired off two tweets, spelling the London mayor’s name “Kahn” in one and in another writing: “SadiqKhan, who by all accounts has done a terrible job as Mayor of London, has been foolishly “nasty” to the visiting President of the United States, by far the most important ally of the United Kingdom. He is a stone cold loser who should focus on crime in London, not me.”

A spokesman for Mr Khan said: “This is much more serious than childish insults which should be beneath the President of the United States.

“Sadiq is representing the progressive values of London and our country warning that Donald Trump is the most egregious example of a growing far-right threat around the globe, which is putting at risk the basic values that have defined our liberal democracies for more than 70 years.”

The US president and Mr Khan have repeatedly clashed in recent years, including Mr Trump criticising the mayor’s response to the 2017 London Bridge terror attack.

A large crowd gathered outside Buckingham Palace in the sunshine as they awaited the arrival of the Trumps, with many holding their camera phones aloft as the pair were helicoptered in.

A huge security operation is in place for the visit, and police officers could be seen standing at three different points on the roof at the front of the palace.

One protester, who dressed in a costume she called “the statue of taking liberties”, said she did not think it was right that Mr Trump was allowed to make a state visit.

Auriel Glanville (76) from London, said: “Climate change is at the top of the agenda and he’s not addressing that.”

Ms Glanville, who spoke from outside the palace, said she hoped Mr Trump’s tea with Charles later would be an opportunity to bring up the issue of climate change.

1 The far right rises: Its growth as a political force in Ireland
2 Coronavirus: Public health experts considered moving Dublin to Level 4
3 President Higgins says British must face up to their history of reprisals
4 Why are some in Fianna Fáil unhappy with Micheál Martin?
5 Coronavirus: Dublin to remain under Level 3 until October 10th - Taoiseach
Real news has value SUBSCRIBE