Deaths from terrorism in Europe have spiked since 2014 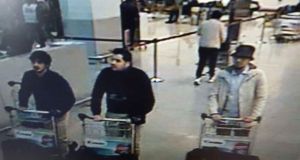 A picture released in March 2016 by Belgian police showing suspects of the attacks at Brussels Airport. Photograph: AFP/Getty Images

A total of 142 people died in terror attacks across Europe in 2016, a death toll on a par with the 148 fatalities the previous year – but a striking increase on the four people who died in 2014, according to new figures from the EU’s law enforcement agency, Europol.

The vast majority of the 2016 fatalities – 135 of the 142 – resulted from 13 separate jihadist attacks, six of which were linked to Islamic State, according to the annual Terrorism Situation and Trend report, which calls for closer cross-border co-operation on intelligence sharing.

In a brutal year, 32 people died in two attacks in Brussels in March; 84 died in a lorry attack in Nice in July; an elderly priest was killed in his Normandy church later the same month; and 12 more were killed in the Berlin Christmas market attack.

Similarly the increase in deaths during 2015 was largely accounted for by two attacks in France at the beginning and end of the year – the first on the offices of satirical magazine Charlie Hebdo that January, and the co-ordinated attacks in Paris in November, in which 130 died in three locations.

As well as marginally fewer deaths in 2016 compared with the previous year, there was also a fall in the total number of jihadist attacks – from 17 in 2015 to 13.

In each of those two years hundreds of victims were left with life-changing injuries. In 2015, says the report, 379 people were injured, many of them seriously – again, on a par with some 350 people who were hurt or badly hurt in 2015.

The large increase in the numbers killed since 2014 reflects the elevated threat from jihadist groups such as Isis, and to a lesser extent a resurgent al-Qaeda, combined with the coming-of-age of radicalised young supporters “born and raised in the EU”.

However, while jihadis posed the main threat, there were 27 attacks by left-wing and anarchist groups in Italy, Greece and Spain.

Europol says dissident republican groups in Northern Ireland were involved in 76 attacks in 2016. Four were carried out using improvised explosive devices (IEDs), including one in which a prison officer was killed, and 123 suspects were arrested.

The report names three dissident republican organisations – the Continuity IRA, the New IRA and Óglaigh na hÉireann, all of which “retain access to a range of firearms and explosive devices, including under-vehicle IEDs”.

In all, eight EU countries were attacked by terror groups of various ideologies. And of the 142 attacks that were either carried out, failed or were foiled, 76 were in the UK, 23 in France, 17 in Italy, 10 in Spain, six in Greece, five in Germany, four in Belgium and one in the Netherlands.

In a comment for the report, the EU’s commissioner for security, Julian King, said the figures showed that not alone did jihadist groups, in particular, not respect borders, they did not recognise them.

“The attacks on London Bridge and on Borough Market have shown that we need a new resolve to defeat these terrorists – a resolve based on shared experience, information and expertise.”

However, the nature of the threat is changing too. “Women have increasingly assumed more operational roles in jihadist terrorism, as have minors and young adults.”

One in four of those arrested was a woman, as against 18 per cent in 2015. Almost one-third of suspects arrested were aged 25 or younger. And the report notes that figures from the Netherlands reveal that more than 40 children aged 12 or under travelled to Iraq and Syria during 2016.

The most tangible evidence of increased EU co-operation is the European Counter Terrorism Centre, which was launched in 2016 at Europol headquarters in The Hague, providing “direct operational support” for investigations.

Even so, Europol’s director, Rob Wainwright, warns that the jihadist threat remains live and international, and “is not expected to come to a halt soon”.