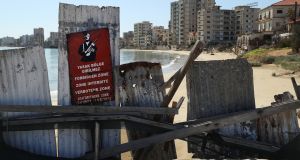 The government of Cyprus has castigated Turkish Cypriot administration plans to reopen the ghost city of Varosha, which was abandoned by Greek Cypriot residents 45 years ago following the Turkish army occupation of the north of the island.

Government spokesman Prodromos Prodromou said Turkish Cypriot activities in the fenced-off city violate UN Security Council resolutions and do not create a positive climate for fresh talks on the reunification of the divided island.

He was responding to a visit by Turkish Cypriot officials and experts to the closed city to inventory decaying residential buildings, hotels, and infrastructure there. The visit, the first by Turkish Cypriot civilians since 1974, is connected to a study of the land registry to ascertain ownership of properties by Greek Cypriots and the Muslim community trust, the Evkaf, which claims substantial holdings in Varosha.

Turkish Cypriot foreign minister Kudret Ozersay said the aim of the effort was to break the status quo. Varosha should not remain a military zone and empty, he said, “while people who have rights to their properties there have no connection”.

He said rights would be respected and former inhabitants would be allowed to return to their properties under Turkish Cypriot “sovereignty”, which is recognised only by Ankara. Few Greek Cypriots are likely to return, although, once their rights are assured, some might be prepared to sell to Turkish Cypriots.

Mr Ozersay disclosed that a Turkish Cypriot goal is to revive Varosha as a tourist destination. This could pump foreign funds directly into the faltering Turkish Cypriot economy, which is dependent on Ankara and has suffered due to Turkey’s economic crisis.

A modern suburb of the 12th-century walled city of Famagusta, the site of Shakespeare’s play Othello, Varosha was a global tourist attraction with golden sandy beaches and 100 hotels with a guest capacity of 10,000. In the 1960s and early ’70s Hollywood stars could be found sunning themselves around hotel pools and on the beach.

After the Turkish army took control, Varosha’s population of 39,000 fled and the Security Council ordered that the city be transferred to the UN administration and resettled only by its former inhabitants. This never happened.

Turkish Cypriot prime minister Ersin Tatar said Varosha had been used as a “bargaining chip” by the Turkish side during negotiations with Cyprus. “At the state we have reached, no agreement is seen on the horizon.” He linked Turkish Cypriot plans to open Varosha to agreements between the Cypriot government and foreign firms for the unilateral exploitation of the island’s undersea natural gas and oil.

Turkish Cypriot moves on Varosha coincide with illegal drilling for oil and gas in Cyprus’s seabed by Turkish vessels and Ankara’s dismissal of sanctions imposed by the EU on Turkey for violating Cyprus’s internationally recognised continental shelf.

It is not clear if these actions will impact informal discussions set for August 9th between president of Cyprus Nicos Anastasiades and Turkish Cypriot leader Mustafa Akinci. These are to take place ahead of meetings in September between them and UN secretary general António Guterres aimed at resuming negotiations between the two territories under UN auspices.