Russia’s opposition responds as over 1,380 are arrested at protest for free elections 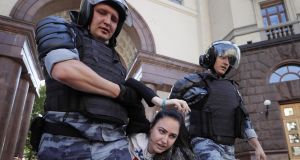 Russian opposition activists were calling on Sunday for fresh protests hours after a violent police crackdown on demonstrators demanding free and fair elections in Moscow.

More than 1,380 people were arrested at the rally that began outside the mayor’s office near the Kremlin on Saturday afternoon and dispersed to other areas of the city centre in the face of the police onslaught.

Five opposition activists who had defied the authorities to call the unauthorised meeting were taken into custody before the event began, leaving demonstrators without any obvious leadership.

The Kremlin’s human rights commission said it was preparing a report for president Vladimir Putin that would criticise both the rally’s organisers and the heavy-handed police response. Calling further protests was a “road to nowhere”, it said.

Large numbers of federal and city police mobilised in central Moscow early on Saturday, parking army trucks and buses along the road leading from the mayor’s office to the Kremlin and checking the passports of passersby.

Arrests began even before the meeting got under way, with helmeted riot police wading into the crowd and hauling people away apparently at random. “We’re seeing the dawn of fascism,” said Mikhail, a retired engineer. “Nowhere near enough people are ready to turn out and cause a revolution here.”

Within an hour police had driven away most protesters from the area around the mayor’s office and were setting upon others in nearby Pushkin Square. They worked methodically and ruthlessly as if to a prescribed target.

The mainly young crowd then dispersed down the city’s leafy boulevards at a fast pace, clapping and chanting slogans calling for the resignation of Mr Putin and Moscow’s mayor Sergei Sobyanin. “This is a breakthrough moment,” said Ivan, a student who had travelled 190km from the Russian city of Vladimir with a group of friends to attend the event. “We didn’t want to miss it.”

The Kremlin appears to have lost patience with the wave of protests that, sparked by an official decision to bar opposition candidates from an upcoming city parliament election, has erupted in Moscow over the past few weeks. While the September 8th poll is of minor political importance, it has become a symbol for many Muscovites of the unaccountability of officials who enjoy huge privileges but deny them the right to be heard.

Police said 3,500 protesters joined Saturday’s demonstration, including not just Muscovites but people from Russian regions. Numbers were hard to gauge as the crowd was so dispersed. Opposition activists put the turnout at more than 10,000.

Towards evening police released opposition activists arrested earlier in the day. Ilya Yashin, a Moscow district councillor, called his Twitter followers to join him in a city square where riot police had encircled a group of protesters and were conducting yet more arrests. He was arrested shortly after he arrived.

The US embassy in Moscow condemned the mass arrests, saying the “use of disproportionate police force undermined the rights of citizens to participate in the democratic process”.

Alexandra Andreeva, a Moscow district councillor, said police should be thankful to city residents for demonstrating so peacefully. “If this was Paris there would have been rioting and looting, but Moscow doesn’t do it like that,” she said.