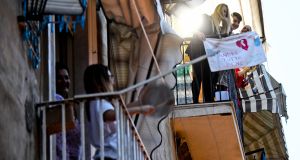 People on the balconies of a building in Naples, Italy, which is locked down, sing together to raise their spirits. Photograph: EPA

In Italy, millions are locked down and more than 1,000 people have died from the coronavirus. In South Korea, hit by the disease at about the same time, only a few thousand are quarantined and 67 people have died. As the virus courses through the world, the story of two outbreaks illustrates a coming problem for countries now grappling with an explosion in cases.

It’s impractical to test every potential patient, but unless the authorities can find a way to see how widespread infection is, their best answer is lockdown.

Italy started out testing widely, then narrowed the focus so that now, the authorities don’t have to process hundreds of thousands of tests. But there’s a trade-off: they can’t see what’s coming and are trying to curb the movements of the country’s entire population of 60 million people to contain the disease. Even Pope Francis, who has a cold and delivered his Sunday blessing over the internet from inside the Vatican, said he felt “caged in the library”.

Thousands of miles away in South Korea, authorities have a different response to a similar-sized outbreak. They are testing hundreds of thousands of people for infections and tracking potential carriers like detectives, using cell phone and satellite technology.

Both countries saw their first cases of the disease called Covid-19 in late January. South Korea has since reported 67 deaths out of nearly 8,000 confirmed cases, after testing more than 222,000 people. In contrast, Italy has had 1,016 deaths and identified more than 15,000 cases after carrying out more than 73,000 tests on an unspecified number of people.

Epidemiologists say it is impossible to compare the numbers directly. But some say the dramatically different outcomes point to an important insight: aggressive and sustained testing is a powerful tool for fighting the virus.

‘China is able to do that’

Jeremy Konyndyk, a senior policy fellow at the Center for Global Development in Washington, said extensive testing can give countries a better picture of the extent of an outbreak. When testing in a country is limited, he said, the authorities have to take bolder actions to limit movement of people.

“I’m uncomfortable with enforced lockdown-type movement restrictions,” he said. “China did that, but China is able to do that. China has a population that will comply with that.”

The democracies of Italy and South Korea are useful case studies for countries such as America, which have had problems setting up testing systems and are weeks behind on the infection curve. So far, in Japan and the United States particularly, the full scale of the problem is not yet visible. Germany has not experienced significant testing constraints, but Chancellor Angela Merkel warned her people on Wednesday that since 60 per cent to 70 per cent of the populace is likely to be infected, the only option is containment.

South Korea, which has a slightly smaller population than Italy at about 50 million people, has about 29,000 people in self-quarantine. It has imposed lockdowns on some facilities and at least one apartment complex hit hardest by outbreaks. But so far no entire regions have been cut off.

Seoul says it is building on lessons learned from an outbreak of Middle East Respiratory Syndrome (Mers) in 2015 and working to make as much information available as possible to the public. It has embarked on a massive testing program, including people who have very mild illness, or perhaps don’t even have symptoms, but who may be able to infect others.

This includes enforcing a law that grants the government wide authority to access data: CCTV footage, GPS tracking data from phones and cars, credit card transactions, immigration entry information, and other personal details of people confirmed to have an infectious disease. The authorities can then make some of this public, so anyone who may have been exposed can get themselves – or their friends and family members - tested.

In addition to helping work out who to test, South Korea’s data-driven system helps hospitals manage their pipeline of cases. People found positive are placed in self-quarantine and monitored remotely through a smartphone app, or checked regularly in telephone calls, until a hospital bed becomes available. When a bed is available, an ambulance picks the person up and takes the patient to a hospital with air-sealed isolation rooms. All of this, including hospitalization, is free of charge.

South Korea’s response is not perfect. While more than 209,000 people have tested negative there, results are still pending on about 18,000 others – an information gap that means there are likely more cases in the pipeline. The rate of newly confirmed cases has dropped since a peak in mid-February, but the system’s greatest test may still be ahead as authorities try to track and contain new clusters. South Korea does not have enough protective masks – it has started rationing them – and it is trying to hire more trained staff to process tests and map cases.

And the approach comes at the cost of some privacy. South Korea’s system is an intrusive mandatory measure that depends on people surrendering what, for many in Europe and America, would be a fundamental right of privacy. Unlike China and the island-state of Singapore, which have used similar methods, South Korea is a large democracy with a population that is quick to protest policies it does not like.

“Disclosing information about patients always comes with privacy infringement issues,” said Choi Jaewook, a preventive medicine professor at Korea University and a senior official at the Korean Medical Association. Disclosures “should be strictly limited” to patients’ movements, and “it shouldn’t be about their age, their sex, or their employers”.

Traditional responses such as locking down affected areas and isolating patients can be only modestly effective, and may cause problems in open societies, says South Korea’s deputy minister for health and welfare Kim Gang-lip. In South Korea’s experience, he said, lockdowns mean people participate less in tracing contacts they may have had. “Such an approach,” he said, “is close-minded, coercive, and inflexible.” – Reuters