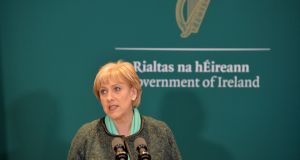 The Government says it has been assured by the grocery retail industry that supplies will be maintained in coming weeks, as the sector strives to meet a spike in demand due to customers stocking up for the Covid-19 lockdown.

Industry leaders have also asked the State for further guidance on what to do if any supermarket employees contract the virus, and the implications of this for keeping stores open and functioning normally.

Heather Humphreys, Minister for Business, Enterprise and Innovation, hosted a roundtable discussion with the sector at her department on Friday morning, which was attended by retailers, suppliers and industry groups.

The meeting included all the major supermarket and grocery convenience retailers, as well as non-grocery retailers, with about 40 industry leaders involved. Some retailers chose not to physically attend as part of social distancing measures, but dialled in to the meeting from outside.

It was the second such discussion between the industry and the Government this week.

Ms Humphreys revealed details of the meeting at a press briefing in Government on Friday afternoon. The Minister assured retailers that, after the medical sector, one of the State’s top priorities was to ensure stability in the grocery sector and to keep supermarkets open and functioning normally.

She said that all the grocery retailers and suppliers at the meeting “assured me that there is sufficient product in the supply chain”.

However, the Government was asked to reassure the public in an effort to dampen panic buying so that it does not become a self-fulfilling prophecy leading to product shortages that then lead to further panic buying when shelves are restocked.

“Grocery retail staff are working long hours at the moment and they deserve recognition and respect for that,” said the Minister.

“For the public, there is no need to over-shop. Just get what you normally need; people don’t need to stockpile. You could be leaving other people short.”

One of the main issues discussed at the meeting was what retailers should do in the event of a staff member contracting the virus. It was agreed that specific advice would be sought from public health experts, and passed on to the sector.

Non-grocery retailers, which are suffering from a collapse in demand rather than a spike, asked the Minister if the State could assist with any fiscal measures for businesses in danger.

In northern Italy, all non-grocery retailers have been ordered to close by the government as part of social distancing restrictions. Ms Humphreys said there were currently no plans to introduce such restrictions in the Republic.

1 How safe is it to go back to the office?
2 Elderly parents living in property you own will save you on capital gains tax
3 Construction workers among first PTSB borrowers off payment breaks
4 More than 40% of help-to-buy recipients already had deposit
5 Owner of Dundrum Town Centre to sell prized assets
6 Regeneron says its antibody cocktail prevents and treats Covid-19 in animals
7 Most workers now expect choice to work from home part-time
8 Help-to-Buy bonus; a taste for working from home; and two landmark deals
9 Can a first-time buyer get relief on a buy-to-let home?
10 Don’t invest in an ETF until you understand the tax
Real news has value SUBSCRIBE