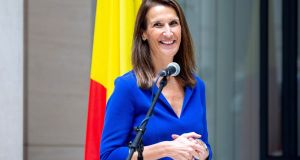 Belgian foreign minister and deputy prime minister Sophie Wilmès (45) has been admitted to intensive care suffering from Covid-19 amid a surge in infections in the country.

Ms Wilmès was prime minister until three weeks ago, when she was succeeded by Alexander De Croo, and led Belgium throughout the year as it as struggled with one of the world’s highest death tolls in the pandemic.

She tested positive for the virus five days ago, writing on social media that she had probably contracted it in her family circle.

“Unfortunately, the multiplication of cases reminds us that no one is safe. Take care of yourself and especially for each other,” Ms Wilmès wrote at the time.

She was admitted to hospital on Wednesday and is conscious and in a stable condition, according to a foreign ministry spokeswoman.

Belgium’s first female prime minister, a member of the French-speaking Reformist Movement political party and a mother of four, Wilmès led a caretaker administration for a year until the formation of the current seven-party government, which is made up of parties spanning the country’s linguistic and political divides.

Along with Austrian foreign minister Alexander Schallenberg, Ms Wilmès was one of two European Union foreign ministers to test positive after they held a meeting in Brussels on October 12th.

Mr Schallenberg’s spokesman told Austrian media that he may have been infected at the meeting, which was also attended by Ireland’s Minister for Foreign Affairs, Simon Coveney.

A string of senior EU figures have been in and out of quarantine as infections soar in Belgium, where nearly 9,000 new cases are detected on average daily, and one-in-four tests in Brussels comes back positive.

European Commission president Ursula von der Leyen abruptly left a meeting of EU national leaders in Brussels last week after learning that a close contact of hers had tested positive. She travelled to Germany for a period of self-isolation.

Belgium this week shut bars and restaurants and imposed a curfew after midnight while restricting the sale of alcohol in a bid to get the spread of the disease under control. With testing facilities unable to keep up, the government has announced that tests are to be restricted to people who have symptoms.