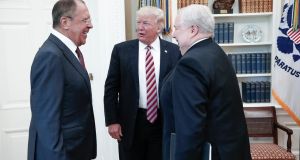 The White House is facing criticism for a possible security breach after it allowed a Russian news service photographer into the Oval Office to take photos of US president Donald Trump and a pair of senior Russian officials.

The Trump administration downplayed the threat, but a senior official acknowledged the White House had been misled about the role of the Russian photographer, who was employed by a state-run news agency.

The cameraman, who stood feet from Mr Trump as he talked with Russia’s foreign minister Sergei Lavrov and the ambassador to the US, Sergei Kislyak, had told the White House he was Mr Lavrov’s official photographer, the source said.

But he did not say that he also works for Tass, a Russian state-run news agency, and White House officials were surprised when photos depicting an apparently jovial moment between Mr Trump and the two Russians appeared online a short time after Wednesday’s meeting, according to the official.

There had been no plans to immediately broadcast images from the meeting.

The chummy photos amazed some observers, particularly coming a day after the president fired FBI director James Comey, who had been running the investigation into whether the Trump campaign co-ordinated with Russian officials.

The US media never caught a glimpse of either Russian inside the White House. When the press pool was allowed into the Oval Office after the meeting, Mr Lavrov and Mr Kislyak had left and, in a surprise, former secretary of state Henry Kissinger was with Mr Trump instead.

The White House posted photos online of the meeting a full day later, but they did not include any images of Mr Lavrov. The ambassador was also not mentioned in the official White House account of the meeting.

The White House defended the decision not to allow any independent press into the meeting. “We had an official photographer in the room, as did they,” spokeswoman Sarah Huckabee Sanders said.

She added that it is “proper protocol” to close a meeting to the press when Mr Trump is meeting a foreign official who is not a head of state. Barack Obama’s staff frequently adopted a similar policy.

But security experts said the risk was real, if remote.

“Deadly serious Q: Was it a good idea to let a Russian gov photographer & all their equipment into the Oval Office?” Colin Kahl, who served as former vice president Joe Biden’s national security adviser, wrote on Twitter.

“No, it was not,” David S Cohen, the former deputy director of the CIA, replied.

The Kremlin has hidden bugs in sensitive US facilities. During Bill Clinton’s term as president, a listening device was discovered in a conference room at the State Department where then secretary of state Madeleine Albright and other senior diplomats routinely held meetings.

“It’s a very low probability that the incursion generated a real security breach,” said Jens David Ohlin, a dean at Cornell University Law School, where he teaches and studies international criminal law and security. “But any breach at all would be catastrophic. Why even take that chance?”

Contact with Mr Kislyak led Michael Flynn to be dismissed from his post as national security adviser and attorney general Jeff Sessions to recuse himself from the probe.

Hours after his meeting with Mr Trump, Mr Lavrov insisted that no evidence exists that Moscow attempted to influence last year’s election or hack the Democratic Party’s email system. He also said the subject never came up during his Oval Office meeting.

US intelligence agencies have concluded that Russia tried to affect the outcome of the 2016 election.