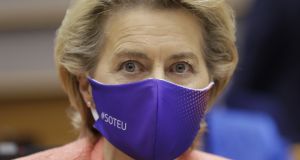 European Commission president Ursula Von Der Leyen was informed on Sunday that a person that she had been in a meeting with had tested positive. The contact took place last Tuesday during a two-day trip to Portugal. Photograph: Olivier Hoslet/EPA

A string of European leaders have been forced to go into self-isolation as Covid-19 infections spread on the margins of official circles, highlighting the challenge of international diplomacy during a pandemic.

European Commission president Ursula von der Leyen was forced to pull out of an EU-Ukraine summit in Brussels this week – the first physical bilateral meeting held with a non-EU country since the outbreak of the pandemic – after she was exposed to the virus.

Dr von der Leyen is in self-quarantine after she was informed on Sunday that a person that she had been in a meeting with had tested positive. The contact took place last Tuesday during a two-day trip to Portugal, in which Dr von der Leyen gave a speech, attended a government meeting and met top officials.

The trip to Lisbon had already drawn questions about whether the travel was “essential”: European Commission bosses are barred from inessential travel, but are left to determine themselves what constitutes a necessary trip.

Dr von der Leyen and her staff are routinely tested twice a week for Covid-19, and she has received two negative results since the exposure.

But the knock-on effect is that she has had to warn attendees of the European Council summit meeting in Brussels last week that they could also have been exposed. The 27 EU leaders including Taoiseach Micheál Martin met to discuss foreign policy, economic issues and the pandemic.

The summit had itself been delayed by a week because the man due to chair it, European Council president Charles Michel, had himself gone into quarantine after his security guard tested positive.

The European Commission reported 20 new cases among its staff on Monday, bringing infections in the EU executive to 74 since the start of September.

At least four commissioners have been in quarantine in recent weeks, one of them after attending a trade meeting in Berlin at which a positive case among Tánaiste Leo Varadkar’s entourage caused German economy minister Peter Altmaier and other leaders to go into quarantine, according to EU officials.

Measures are in place to reduce the risk of a European summit triggering a cluster of infections among the continent’s political leadership, as happened in the White House with the infection of US president Donald Trump and top Republican leaders.

National leaders may only attend summits with a strictly limited number of officials. Masks and distancing are compulsory while cleaning has been stepped up, and journalists are kept away from the events with all press conferences streamed online instead.

Many lower-level meetings have been moved online, but the EU considers top-level physical meetings to be “crucial” in order for the bloc to come to decisions and set policy on the most important issues.