If ICU capacity is real issue then we should buy hospitals, says Alan Kelly 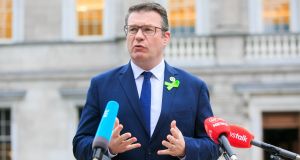 Labour leader Alan Kelly has called on the Government to “buy a number of private” hospitals instead of going to Level 5 of the Covid-19 alert plan.

Mr Kelly said if there was concern over hospital capacity and the availability of ICU beds in the event of a surge, then the sensible thing would be for the Government to buy private hospitals. “If ICU capacity is the real issue then we should just buy a number of the [private] hospitals and take in a lot of their capacity.

“In that scenario we will be able to keep the economy much more open.”

Labour Party sources said buying private hospital capacity would cost about €1 million per bed but would be worth it. Mr Kelly said the beds would be made public and the investment would pay for itself.

“The tax revenue that would be lost [during Level 5] will pay for it in the first place. We are suggesting it will be cheaper and better for us all if they actually buy some of the private hospitals out there because we need them from a capacity and an ICU perspective.”

Mr Kelly was highly critical of the manner in which the NPHET recommendation to move to Level 5 was announced, saying it was a “PR disaster”. He said the shock nature of it had upset a lot of people and led to sleepless nights.

It is understood that coalition party leaders have concluded their meeting with the chief medical officer and the Cabinet has decided it will not move the entire country to a Level 5 status, although the current status would be elevated.

A Cabinet meeting is taking place this afternoon to sign off on any change in controls.

Mr Kelly said the Government needed to improve its communications and come out with clear statements in relation to hospital capacity.

He argued if ICU capacity was the issue (243 of the available 281 beds are currently occupied, the vast majority with non-Covid cases) then Minister for Health Stephen Donnelly needed to deal with that issue by increasing capacity rather than shutting down the whole economy.

Earlier, Fianna Fáil TD Jim O’Callaghan said the public would not change its behaviour and response to the coronavirus through “coercion”.

The Fianna Fáil TD criticised the inconsistency from NPHET and questioned why it had escalated to recommend a move to Level 5 so quickly.

Mr O’Callaghan said the country was “nowhere near” where it had been at the height of the pandemic in April. He said of the 1,810 people who had died from Covid-19, only 47 had died since August. He also said that there were 881 hospitalised with Covid-19 in April with 155 in intensive care beds, compared with the current figures of 134 hospitalisations and 21 in intensive care units.

The Government’s failure to invest in healthcare services “has left us dangerously vulnerable” she said.

Michael McNamara, Independent TD and chair of the Oireachtas Covid-19 committee, said “measures that are not necessary will do irreparable damage,” and the Government’s response needed to be “proportionate.”

Michael Fitzmaurice, Independent TD for Roscommon–Galway, said moving to Level 5 would be pressing the “nuclear button” in response to increasing cases.

“In a lot of rural areas there’s more chance of getting bitten by a dog than getting Covid . . . If we close businesses this country will go broke,” he said. “I don’t see the point of shutting down hairdressers, or hardware stores, if the schools are open,” he said.

Minister for Higher Education Simon Harris said the “leaks and speculation” about the NPHET recommendations did not help the situation. “Today needs to bring clarity. Until then let’s focus on what we can control & what we can do - keep distance, reduce contacts, wear face coverings,” he tweeted.