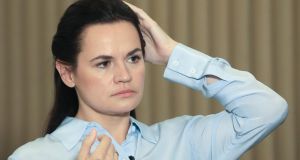 Belarusian opposition leader Svetlana Tikhanovskaya has called on the United Nations to help end the crisis in her country, as the autocratic regime of president Alexander Lukashenko continued to draw closer to Russia and blame the West for stirring up unrest.

At least three people have died, hundreds have been injured and more than 7,000 detained in an often-violent police crackdown on peaceful protests against Mr Lukashenko’s claim to have won an August 9th presidential election, which the European Union and United States say was rigged.

Belarus’s ruler of 26 years says the protests are orchestrated from abroad, and he has accused neighbouring EU and Nato states Poland and Lithuania of posing a military threat to his country. Moscow has pledged to defend Belarus from any external aggression and to send police to the country if demonstrations turn violent.

“We, the Belarusian people, need the help of the United Nations in order to stop blatant human rights violations and cynical disregard for human dignity,” said Ms Tikhanovskaya, who fled to Lithuania after the election having allegedly been threatened in her homeland.

“We call on the UN to send an international monitoring mission urgently to Belarus to document the situation on the ground,” she told an informal session of the UN Security Council by video link on Friday.

“The nation’s demands are simple: an immediate end to violence and threats from the regime, the immediate release of all political prisoners, and free and fair elections. There is only one obstacle to these demands – Mr Lukashenko,” she added, saying that he “no longer represents” his country of 9.5 million.

The EU is drawing up a list of Belarusian officials who it plans to sanction over the alleged election fraud and police violence, while Lithuania, Latvia and Estonia have already barred Mr Lukashenko and 29 allies from their territory.

Protests continued on Friday in Belarus, and police entered a university in Minsk and detained several student demonstrators. More rallies are planned over the weekend, following two consecutive Sundays when more than 100,000 people marched through the capital.

Mr Lukashenko has turned to Russia for help during the biggest crisis of his career, having been unusually critical of Moscow before the election as it sought to accelerate integration of the two countries through their “union state” agreement.

Russia’s prime minister led a delegation to Minsk on Thursday, while Belarus’s foreign minister held talks in Moscow on Wednesday and its defence minister, Viktor Khrenin, was in the Russian capital on Friday.

“Various destructive forces, whipped up by the leadership of such states as Poland, Lithuania, the Czech Republic and Ukraine, attempted to bring about an unconstitutional change of power,” he said.

“Now certain forces in the West . . . are actually switching to the forms and methods of waging a hybrid war against the Belarusian state, using unprecedented measures of diplomatic and political-economic pressure.”

Nato and Belarus’s western neighbours deny such claims. About 500 US troops and armoured vehicles were due to arrive in Lithuania from Poland on Friday for scheduled exercises, and the detachment is now expected to stay longer than originally planned.