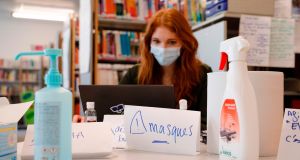 A woman works on a table with face masks and hand sanitiser inside a Paris public hospital. Photograph: Geoffroy van der Hasselt/AFP via Getty

The coronavirus epidemic is severely testing fundamental principles of European integration, including the notion of solidarity and the free movement of goods within the single market.

Some European diplomats in Paris are sceptical about French motives. For example, while France portrays its advocacy for so-called coronabonds as moral support for Italy and Spain, the countries hardest hit by the epidemic, France’s exploding expenditure makes mutalised debt an attractive prospect, one diplomat notes.

Anothor diplomat, from a food-exporting country, found finance minister Bruno Le Maire’s exhortation to supermarket suppliers to Buy French “very much against the spirit of the EU”.

But perhaps no French move has alarmed other Europeans more than Paris’s ban on the export of surgical masks and other medical supplies to its European partners.

On March 3rd, President Emmanuel Macron announced that he was requisitioning “all stocks and the production of protective masks” for distribution to medical personnel and French people infected with Covid-19.

One fifth of all surgical procedures in the EU use personal protective equipment imported from Asia by the Swedish company Mölnlycke. The company’s main distribution warehouse for southern Europe, Belgium and the Netherlands is in Lyon.

Mölnlycke’s entire stock of an estimated six million masks was seized by the French. All had been contracted for, including a million masks each for France, Italy and Spain. The rest were destined for Belgium, the Netherlands, Portugal and Switzerland, which has special trading status with the EU.

Italy and Spain urgently needed their masks, so Mölnlycke tried to cover the loss of the confiscated masks by ordering more from suppliers in far east Asia.

An unknown number of masks in the subsequent shipment, believed to be in the hundreds of thousands, were also confiscated. Mölnlycke refused a request for an interview about the story and would not confirm a colourful version involving a ship’s captain who allegedly halted unloading in Marseille to reroute for the safety of a Belgian port.

France eventually allowed two million masks which Mölnlycke had contracted to deliver to Italy and Spain to be shipped. French media reported that France donated one million masks to Italy in the spirit of solidarity.

“Public health is not an EU competence,” notes a diplomat from a third EU country in Paris. “The Treaty on the Functioning of the EU stipulates that in the event of a national public health emergency, you can impose import or export restrictions.”

The French were concerned that desperately needed surgical masks not be allowed to leave the EU during the crisis. Sweden reluctantly accepted a ban on exports to countries outside the EU, in the mistaken belief that France, like Germany would lift their ban on internal EU transfers, as recommended by the European Commission.

A commission spokeswoman on the internal market confirmed that Germany lifted its EU internal export ban, but France “clarified that it will not prevent supply to other EU countries once internal vital needs are met.”

The EU diplomat who cited the treaty basis for restricting internal trade changed his mind when Paris persisted after the Commission’s recommendation. “When the Commission says, ‘We do not think your export ban is justified,’ governments are under obligation to lift those bans. The Germans did so expediently. They French have been very slow”.

Stockholm protested at the highest level. Prime minister Stefan Löfven raised the subject with the French prime minister and president. For Stockholm, the French confiscation was tantamount to nationalising a private company belonging to a European partner.

“The problem is almost solved and we are working on a complete solution, I hope within a few days,” said a French official involved in the mask saga.

“It is not solved,” a Swedish source insisted. The French official’s statement was interpreted to mean that the EU ban on exporting medical equipment outside the Union was a partial solution.

The spat is not about money, the Swedes insist, since surgical masks have relatively low monetary value. “In an EU crisis, they confiscated masks that were ordered and designated for other nations ... The French often evoke solidarity within the EU. The really fundamental principle of free movement of goods within the EU is toppled,” says a Swedish official.

France announced at the weekend that it is purchasing 600 million masks from China. The contract “shows the limitations and contradictions of the export ban,” says a Swedish source.

Though Franco-Swedish relations are good overall, the flap risks leaving a negative impression on Swedish and other potential European investors after the crisis. For now, Mölnlycke “is avoiding France altogether,” says a Swedish source. “So that is the consequence. The French market is avoided because it is not seen as reliable.”