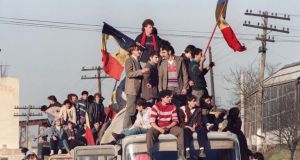 The grainy footage still conveys the air of unreality in the cramped room as Nicolae and Elena Ceausescu, Romania’s ruling couple for 24 years, faced a summary military trial at an army barracks on December 25th, 1989.

Just three days earlier they had still hoped to crush huge protests by their impoverished people, but now they stood in the dock accused of genocide, two elderly people clad in expensive coats that were the last trappings of their reign.

The archive film shows the Ceausescus, bewildered yet defiant, peering at the military officers crammed into the room, at the Kalashnikov-wielding soldier guarding the door, and at a man who stands to address them wearing jeans and a thick brown sweater with Romania’s colours tied around his arm.

Dan Voinea was the military prosecutor who had been ordered to draw up the indictment against the Ceausescus. He flew by helicopter from Bucharest to the Targoviste base 80 km away to deliver it at this hastily-arranged show trial.

The main charge was genocide – though it was unclear whether the 60,000 deaths they were accused of causing were supposed to have taken place during four days of revolution or their entire rule – and the penalty was execution.

“I issued the arrest warrant for the Ceausescus,” Voinea recalls.

“In the headquarters of the Communist Party central committee we found transcripts from December 17th and 19th in which Ceausescu ordered troops to open fire on demonstrators in Timisoara,” says Voinea, referring to the western city where the revolution began before erupting in Bucharest on December 21st.

“He also ordered thousands of people to be arrested and taken to penitentiaries, where they were beaten,” Voinea adds.

“Illegal detention and murder of political opponents are crimes against humanity and they were punishable at that time with death. So this was the legal characterisation that I gave it.”

The trial took place in an atmosphere of mass confusion and fear: about 250 people had been killed and 1,000 hurt in clashes with the security forces before the Ceausescus fled Bucharest on December 22nd. Around 900 more died and 2,150 suffered injury in chaotic violence that followed their arrest that same day.

A clique of communist politicians and military officers calling themselves the National Salvation Front (NSF) stepped into the power vacuum and claimed to be fighting for the people against counter-revolutionary “terrorists” and shadowy pro-Ceausescu forces; it was this group that ordered the military tribunal at Targoviste.

“People were dying every day in the streets, reports of ‘terrorist’ sabotage had begun . . . and the demonstrators were demanding that the Ceausescus be tried,” says Voinea, who was then 39 years old.

“I hated them, because I had brought that feeling of hatred from the street . . . He had ordered unarmed people to be shot, people who did not even carry a knife and were shouting only for freedom, not even for bread.”

Ceausescu (71) denounced the court and said he would only answer to Romania’s parliament, and neither he nor Elena (73) – his co-ruler who had officially been a deputy prime minister since 1980 – showed any sign of remorse.

“She kept wanting to interrupt the trial but he would squeeze her hand to shut her up,” says Voinea.

“They seemed to think the trial was just for appearance’s sake and nothing would happen to them. It was only when their hands were tied and they were forcibly taken out that they started shouting at people.”

Voinea had left the room before the military judges delivered the inevitable guilty verdict, and was in a courtyard of the base when a noise made him turn.

“A couple of soldiers were basically carrying Ceausescu out and dragging her along . . . The soldiers pushed them against a wall and as they backed away they started shooting,” he recalls.

“Of course it was shocking. It was the first execution I had witnessed and it’s not something you can forget.”

With the dictator dead, the NSF consolidated power and the supposed “terrorists” mysteriously melted away. NSF leader Ion Iliescu became Romania’s president in May 1990 and dominated its politics for most of the next 15 years.

Voinea began investigating the violence of December 1989 and unpicked a web of confusing and contradictory orders that sparked vicious gun battles between police, military units and civilians who thought they were fighting remnants of the old regime.

In one such incident, Voinea explains, military aircrews were told to remove insignia from two helicopters and fly to Bucharest television headquarters and fire at a certain floor, which supposedly had been seized by terrorists.

At the same time, soldiers located on that floor received a warning that two unidentified helicopters were approaching with suspected terrorists on-board; servicemen on both sides were injured in the ensuing “friendly fire”.

“In nearly all cases we identified who fired and from where and who the victims were. None of them were terrorists. I cannot give you single example of a killed or injured or apprehended terrorist,” Voinea says.

“This was a story spread by Iliescu and others on television – that terrorists are shooting from all sides so people should just stay at home and let the army do its job. The armed forces were on his side, and they were all scared of having power snatched away by the kids who were demonstrating on the streets.”

Voinea retired as a military prosecutor in 2007, having seen several attempts to prosecute senior figures over the revolution and its aftermath stymied by allies of Iliescu and others who assumed positions of power in post-communist Romania.

This year, however, Iliescu, former deputy prime minister Gelu Voican Voiculescu and ex-air force chief Iosif Rus were charged with crimes against humanity for sowing the deadly chaos that followed the ousting of Ceausescu.

Preliminary hearings began last month, and Voinea suspects the case will be thrown out – like previous ones – on technicalities. The accused deny all wrongdoing.

“I went to Targoviste in 1989 expecting the Ceausescus to be formally arrested and transferred to Bucharest for a proper trial. I would have preferred that because there were so many things we needed to find out from them,” he says.

“But the political stakes outweighed the desire for normality and justice . . . and the communists sacrificed the Ceausescus to save themselves.”

Yet looking back through the fog of cover up, confusion and incompetence that have obscured the truth about the revolution and its aftermath, Voinea sees a gleam of honour in the bullets fired at the Targoviste barracks that Christmas Day.

“Justice was done,” he says. “Justice for the people.”