Families of those killed at shootings at two Christchurch mosques in 2019 have given emotional victim impact statements at the start of the four day sentencing hearing for Australian Brenton Tarrant, 29, who killed 51 people. Video: Reuters 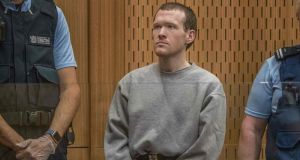 The white supremacist who killed 51 worshippers at two New Zealand mosques had intended to burn down the mosques afterwards, a prosecutor said in court on Monday. Photograph: John Kirk-Anderson/AFP via Getty Images

A court in New Zealand has heard for the first time an official account of how a terrorist who murdered 51 people at two mosques in Christchurch planned and executed the attacks – and of his intention to burn down both places of worship and attack a third.

The details of the attack were read at the beginning of a high-security hearing to decide whether the Australian man who has admitted committing the mass shootings will ever leave prison.

Those bereaved in New Zealand’s worst peacetime massacre, and its survivors, are facing the gunman, Brenton Tarrant, in court for the first time. All his previous court appearances since the terrorist attack on March 15th last year have been via video link from jail.

Tarrant, a self-professed white supremacist who broadcast part of the massacre live on Facebook, pleaded guilty in March this year to 51 counts of murder, 40 of attempted murder and a charge of terrorism. His decision to abandon an earlier plea of not guilty averted a lengthy trial that was expected to take months. It also meant there has been no official account of the killings.

On Monday, a prosecutor read the authorities’ version of events, telling the court of the detail in which Tarrant had planned the attacks, buying multiple firearms, thousands of rounds of ammunition, ballistic armour and military-style vests.

He moved to New Zealand from Australia in 2017 and began planning the attacks, researching various New Zealand mosques, viewing plans of the buildings he intended to attack and making a trip to Christchurch from the southern city of Dunedin, where he lived, two months before the massacre.

While there, he flew a drone over Al Noor mosque, scoping the building’s entrances and exits. On the day of the attacks, he had petrol cans in his car that, the police said, he intended to use as incendiary devices.

After the official account of events on Monday the first of dozens of victims due to speak during the four-day hearing read emotional statements in front of the gunman, in a subdued courtroom that was sparsely populated due to coronavirus restrictions.

Tarrant was brought into the dock by four police officers with his hands shackled to his waist. Wearing a grey prison sweatshirt and track pants he had a blank expression as he sat behind a glass barrier, occasionally looking around the room.

Early in the hearing, he had twisted his fingers together so tightly that they had turned white. Nothing visibly moved the gunman – not a description of his murder of a three-year-old child; not that of a woman whose spinal injury will make her need a wheelchair for life, nor the account of another whom he shot and later ran over as he fled one of the mosques.

Tarrant faces the possibility of being the first offender in New Zealand sentenced to life in prison without the chance of parole. After electing to represent himself, he will have the opportunity to speak in court during a hearing that could present questions for the judge, and reporters, about whether any views he promotes should be suppressed or censored.

As a description of one man’s death was read, the victim’s mother, in court, silently covered her mouth with her hands.

In the corners of Al Noor, worshippers were huddled together and on top of each other in efforts to hide from the gunman, the court heard, as there was nowhere to escape in the open-plan prayer room. He fired 32 shots into the mass of people, before turning his attention to another huddled group trying to escape through a single exit door at one end of the room.

But there he was prevented from killing more by an act of heroism: a man named Naeem Rashid threw himself at the gunman before being killed. The police said his actions allowed some of those trying to get through the door to escape.

When the gunman returned to the group huddling in the corner, some who had already been shot were crying out for help or moving slightly; he systemically shot in the head anyone who appeared to be alive.

The prosecutor also described another act of bravery from Adbul Aziz, a man at Linwood mosque who ran screaming at Tarrant, later chasing him and hurling one of the gunman’s weapons into a window of his car.

After Tarrant was arrested as he fled by car from the second mosque, according to the police summary, he admitted to the crimes. He told officers that he wished he had killed more people, and stated political and anti-Islamic views as his motivations.

After the lengthy description of events, victims of the attacks were allowed to speak in court, standing just metres from the gunman and sometimes addressing him directly.

Among them was Gamal Fouda, the imam of Al Noor mosque, who was leading prayers when the terrorist stormed in. “You were misguided and misled,” said Mr Fouda, making direct eye contact with Tarrant. “We are peaceful and a loving community who did not deserve your actions.”

He added: “Your hatred is unnecessary. If you have done anything, you have brought the world community closer with your evil actions.”

Describing Tarrant as a “brainwashed terrorist,” the imam added that New Zealand’s response to the attacks had been “the opposite to what the terrorist had wanted”.

“The world saw New Zealand as what it was and the terrorist was seen as a criminal,” Mr Fouda said. “New Zealand is seen by the world as a model of compassion, love and harmony.”

There is an unprecedented level of security at the Christchurch courthouse, with armed police stationed outside and throughout the building, snipers on the roof, and vehicle barricades blocking off the streets outside. The barricades are attached to large concrete blocks which were lifted into place with cranes at the weekend. – Guardian