Spanish government insists vote will not be allowed to take place 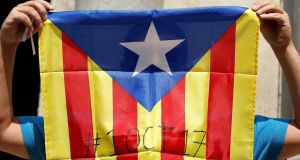 A Catalonia independence supporter holds up a Catalan Estelada flag, with the date for the proposed independence referendum, in Barcelona, Spain, on Friday. Photograph: Albert Gea/Reuters

The nationalist government of Catalonia has announced that the referendum on independence from Spain it wants to hold will take place on October 1st, despite staunch opposition to the plan in Madrid.

The Catalan premier, Carles Puigdemont, unveiled the date of the slated vote at the regional government palace in Barcelona on Friday morning, flanked by fellow pro-independence politicians.

He also announced the referendum question: “Do you want Catalonia to be an independent state in the form of a republic?”

The announcement is not a surprise. For months, Mr Puigdemont had been pledging to hold a Yes/No referendum on independence from Spain by early October. However, the enormous uncertainty surrounding the northeastern region remains, given the central government’s insistence that the vote cannot take place because it is unconstitutional.

“It’s not one person’s refusal, it’s the refusal of an entire political system,” Mr Puigdemont said, adding that the Spanish state “has shown itself to be utterly unwilling to be involved in resolving a real, deep problem”.

Last month, the Catalan premier issued what appeared to be a final offer to Spanish prime minister Mariano Rajoy to discuss the terms of a negotiated, Scotland-style referendum. But Mr Rajoy described the plan as “a serious threat to coexistence and constitutional order”.

The Catalan government has been preparing the legal ground for secession over recent months in the regional parliament. Media reports have suggested that if the referendum were thwarted, Mr Puigdemont’s administration would declare independence anyway, a claim his government has dismissed.

The Catalan government organised an informal, non-binding referendum in 2014, which favoured independence but saw a low turnout due to its illegal status. Madrid appears to be more determined to prevent this vote, given the fact that separatists see it as legally binding, potentially leading to an independent Catalan state.

However, it is still not clear to what lengths the Spanish government would go to prevent the vote from taking place, nor what the reaction of the Catalan administration would be if its referendum plan is blocked. There has been speculation that it might respond by calling new regional elections.

The pro-independence Junts pel Sí (Together for Yes) coalition that governs Catalonia claims it has a mandate to push ahead with what it calls an independence “roadmap” since clinching a majority of seats in the regional parliament in 2015, with the help of the anti-capitalist Popular Unity Candidacy (CUP). However, the separatist parties fell short of a majority of the popular vote.

Polls show Catalans are virtually split down the middle on secession, although a clear majority would like a negotiated referendum.