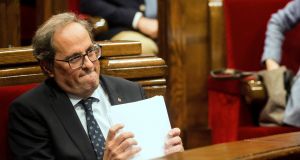 The future of Spain’s Socialist government is in doubt after Catalonia’s president, Quim Torra, threatened to withdraw parliamentary support for it if Madrid does not agree to hold a binding referendum on independence for the region.

“If there is no proposal before November for us to exercise our self-determination in a negotiated, binding and internationally recognised way, the independence movement cannot guarantee Mr Sánchez any kind of stability in congress,” Mr Torra said, speaking during the Catalan parliament’s inaugural autumn session.

Prime minister Pedro Sánchez, who only took office in June, requires the votes of pro-independence parties in the national parliament in order to approve legislation. Losing their support could trigger the collapse of his government, which is hoping to push the 2019 budget through parliament in the coming weeks.

However, the Spanish government immediately ruled out holding an independence referendum, with spokeswoman Isabel Celáa saying that Mr Torra “does not have to wait until November for our answer”.

“From the government we reply: self-government, yes; independence, no,” she said. “Co-existence and not independence.”

Mr Sánchez’s government has repeatedly said it is willing to work towards boosting Catalonia’s existing powers, which include its own education system and police force but not full control over its taxes.

Although there were media reports that Mr Torra’s warning had taken Catalonia’s main pro-independence parties by surprise, they appeared to endorse his words.

“The time for nice words is up,” said Eduard Pujol of Together for Catalonia, the electoral coalition led by exiled former president Carles Puigdemont, who is a close ally of Mr Torra.

The Catalan leader’s speech followed a day of demonstrations on Monday to mark the anniversary of the staging of an outlawed independence referendum last year. His own position had come under scrutiny as some grass-roots supporters, apparently frustrated at the lack of a clear independence roadmap, chanted for his resignation and booed him.

Mr Torra has also faced criticism from unionist parties after voicing support for pro-independence activist groups, some of which were involved in violent altercations with the police on Monday. But on Tuesday he said violence had no place in the independence movement.

In the wake of his parliamentary speech, the opposition Popular Party called on the Spanish government to reintroduce direct rule, which was in place in Catalonia between October and June. “The destiny of Spain cannot be in Torra’s hands,” said PP member of parliament Andrea Levy.

However, Ms Celáa said there were no plans to use direct rule.