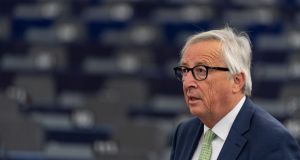 European Commission president Jean-Claude Juncker has reiterated to British prime minister Theresa May that there must be agreement on the Irish border if the UK wants a Brexit deal.

Despite the rejection of key elements of Mrs May’s Chequers blueprint for Brexit at last month’s informal summit in Salzburg, Mr Juncker said the EU still wanted an agreement.

However, addressing the European Parliament in Strasbourg ahead of the next EU summit in Brussels later this month, he stressed the EU would not compromise on key principles.

“We will have an interesting meeting as far as Brexit is concerned. We want to have a deal. Those who think a no-deal would be a better solution are not aware of the difficulties such a scenario would imply,” he said.

“When it comes to the Border between the Republic of Ireland and Northern Ireland, we are sticking to the point of view we have expressed so many times - Ireland first.”

The summit on October 18th to 19th has been billed as the “moment of truth” when it will become clear whether it is possible for the two sides to do a deal.

Mrs May has said the Government is working on new proposals to resolve the issue of the Irish Border - ensuring there is no need for the return of “hard border” controls - although it is unclear whether they will be ready in time for the Brussels meeting.

The parliament also heard renewed criticism of foreign secretary Jeremy Hunt over his comparison of the EU to the former Soviet Union.

Manfred Weber, the leader of the main centre right grouping in the parliament, said Mr Hunt needed to apologise for his comments.

“Now we experience a new level of populism when the foreign minister of Great Britain, Hunt, is comparing the European Union with the Soviet Union,” he said.

He added: “So Sikorski is right. Mr Hunt, you should apologise for what you have said.”

Mr Hunt’s comments were welcomed by former Ukip leader Nigel Farage, who said the foreign secretary had been echoing a view he had expressed for years.

“For a decade here I have noticed that that centralising authoritarian tone began to sound very much like the old Soviet Union,” he told the parliament.

The Democratic Unionist Party (DUP) MEP Diane Dodds - whose party props up Mrs May’s Government at Westminster - warned they would never accept the “impossible demands” of the EU for a “backstop” which would see the imposition of customs controls between Northern Ireland and the rest of the UK if the two sides failed to reach a wider agreement on trade.

“The idea, as proposed in the backstop, that we would allow Northern Ireland to become some sort of semi-detached part of the United Kingdom is both offensive and outrageous,” she said.

“Protecting the constitutional and economic integrity of the United Kingdom is a red line that cannot be broken or bent.

“When it comes to the stability of the United Kingdom and the security of Northern Ireland’s place in it - mark my words, we are not bluffing.” - PA