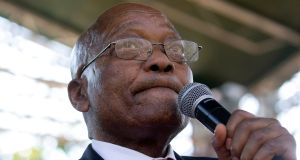 Former South African president Jacob Zuma is alleged to have enabled the Guptas to offer cabinet posts to ruling party members prepared to do their bidding. File photograph: Reuters

The head of an inquiry into state-sponsored corruption has been given an 18-month extension to its lifespan, though witness hearings have only just begun.

The Commission of Inquiry into State Capture, Corruption and Fraud in the Public Sector was originally allocated six months to investigate allegations that the Gupta business family illegally influenced political decisions to their advantage.

But before it started to hear witness evidence in mid-August, deputy chief justice Raymond Zondo said it would be impossible for it to complete its work in the time frame allotted. Subsequently, the Pretoria high court confirmed on Tuesday that an 18-month extension had been granted.

It is hoped this new deadline of March 2020 will enable the commission to fully examine the nature and extent of the nine areas of alleged corruption outlined in its terms of reference.

These include claims that former South Africa president Jacob Zuma enabled the Guptas to offer cabinet posts to ruling party members prepared to do their bidding. And that state officials unlawfully awarded public sector tenders to the business family.

Six of the terms arose from the 2016 State Capture Report, an investigation published by South Africa’s corruption ombudsman, the public protector. It recommended a commission of inquiry be established as Zuma had failed to order an investigation into claims of corruption involving the Guptas.

That report also outlined undue influence the Guptas allegedly had over parts of government and some state-owned enterprises. Moreover, it implicated officials, cabinet ministers and Zuma in a level of public sector corruption that has rocked the ruling African National Congress (ANC) party to its core.

Zuma and Gupta brothers Athol, Ajay and Rajesh all deny any wrongdoing. They claim they are the victims of factional battles taking place in the ANC. The former president was forced from office in February due to the allegations of corruption against him.

The billionaire businessmen, originally from India, fled South Africa shortly after Zuma was ousted and are now based in the United Arab Emirates.

Public enterprise minister Pravin Gordhan, a former finance minister in Zuma’s government, has claimed the country is estimated to have lost 100 billion rand (over €6 billion) through corrupt activities linked to the Guptas and their associates.

The authorities have already moved against some people suspected of pillaging state resources. Several Gupta associates and family members have appeared in court in relation to suspected fraud connected to a dairy project in the Free State province. The police also want to question Ajay Gupta over his role in connection with this.

In his evidence to the inquiry in late August, Jonas said that during an October 2015 meeting with Ajay Gupta set up by Duduzane, he was offered the job of minister for finance and the bribe in return for “working with them”.

Jonas said the Gupta brother told him: “You must understand that we are in control of everything – the National Prosecuting Authority, the Hawks [police], the National Intelligence Agency and the old man [former president Zuma] will do anything we tell him to do.”

Former ANC MP Vytjie Mentor also told the inquiry she too was approached by the Guptas with a cabinet job offer.

Former cabinet spokesman Themba Maseko linked Zuma with the Guptas when he told the inquiry that in 2010 the then president instructed him to meet the businessmen. When he did, they ordered him to channel state advertising to their new media ventures.

Maybe the most sensational development so far occurred in late September when the inquiry took possession of two hard drives containing hundreds of thousands of leaked Gupta emails acquired by whistleblowers in early 2017.

The inquiry heard the emails were from the then chief executive of the Gupta-owned Sahara Computers and other company members.

The emails eventually ended up in the hands of investigative journalists. And they went on to use the information in articles about state capture that painted a picture of government corruption that few thought possible.