‘Death of democracy’ in Cambodia as court dissolves opposition 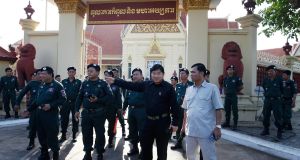 The government-filed lawsuit against the Cambodia National Rescue party (CNRP) is seen as a crippling blow for free and fair polls. Having ruled for 32 years, Hun Sen has already shut independent newspapers and radio.

Firmly controlled by the premier’s allies, the court agreed with the government that the CNRP had conspired with foreigners to stage a revolution, charges the party rejects as politically motivated.

“The supreme court has decided to dissolve the Cambodia National Rescue party and ban 118 individuals ... from doing political activities for five years starting from the day of this verdict announcement,” a judge said.

More than half of CNRP legislators have already fled the south-east Asian nation of 16 million people.

Advocacy groups immediately condemned the ruling. Human Rights Watch said it represented the “death of democracy” in the country.

“The supreme court’s dissolution of the CNRP is the culmination of Hun Sen’s backdoor plan to ensure his victory in next year’s election,” said HRW’s deputy director for Asia, Phil Robertson.

Kingsley Abbott, of the Geneva-based International Commission of Jurists, said the legal process leading to the verdict was “nothing more than political theatre”.

“By dissolving the main opposition party, the supreme court is irreparably interfering with the rights of potentially millions of Cambodians to freely choose their political representatives and vote for them in the upcoming elections,” he said.

He pointed to the fact that the president of the supreme court, Dith Munthy (76) had been a member of Hun Sen’s ruling party since 1989 and continued to serve on two committees.

“It makes a mockery of fair justice to have someone in a leadership position within one political party sit in judgment on the conduct of that party’s main opposition,” Mr Abbott said. “There can be no starker example of an inherent conflict of interest.”

Hun Sen’s rule has become increasing autocratic, a backlash that appears motivated by the opposition’s unexpected electoral gains in 2013. In the June 2017 commune polls , the CNRP took close to 44 per cent of all seats, further upsetting his ruling party.

Cambodia has imprisoned myriad opposition leaders, including Sam Rainsy, the founding president of the CNRP, who is now in exile. The government has forced the closure of media organisations, including the renowned Cambodia Daily newspaper , and kicked out civil society groups.

In September, the current CNRP leader, Kem Sokha, was thrown in jail for treason charges . Hun Sen accused him of conspiring with the US to topple the government, and Sokha faces up to 30 years in prison if convicted.

“Whatever Mr Hun Sen wants, he gets. People are so fearful,” she told the Guardian in an interview .

Thursday’s hearing was scheduled to start at 8.30am, but the verdict was read later in the evening following a day of testimony, including from ministry of interior lawyers. The capital was on security lockdown, with multiple police barricades around the court.

Hun Sen has used the spectre of US meddling to rally against his opponents, and the US embassy in Phnom Penh warned all of its citizens to “exercise caution”, especially around the supreme court.

“Even demonstrations or events intended to be peaceful can turn confrontational and possibly escalate into violence without warning,” it said. However, there were no signs of immediate protests.

Asean Parliamentarians for Human Rights, consisting of current and former lawmakers in Asia, said the ruling had rendered next year’s elections illegitimate.

“One thing remains crystal clear: the CNRP was dissolved not for breaking any laws, but simply for being too popular and a threat to the ruling party’s dominance,” said the APHR chair Charles Santiago, a member of the Malaysian parliament. – Guardian