Britain and US accused of ‘masterminding’ nerve agent attack 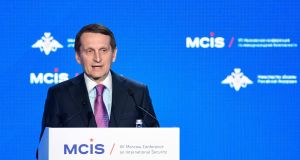 Russia has accused British and US secret services of masterminding the poisoning of a former Russian double agent in the UK and of bullying their western allies into implicating the Kremlin in the crime.

Allegations by the United Kingdom and the US that Russia was behind the nerve agent attack on Sergei Skripal and his daughter Yulia in the UK were a “grotesque provocation . . . cooked up by British and US security services”, Sergei Naryshkin, the head of Russia’s foreign intelligence agency, told an international security conference in Moscow.

British and US officials had put “aggressive pressure” on Nato allies, European Union and Asian states to unite in condemning Russia over the Skripal affair, he said. The approach was typical of the “America-centric system of inter-government relations based on coercion and even blackmail”.

Mr Naryshkin was speaking as the Organisation for the Prohibition of Chemical Weapons met at Russia’s request to discuss UK allegations that the Kremlin was behind the attack on the Skripals.

Relations between Russia and the West have deteriorated sharply since the March 4th nerve agent attack on the Skripals in Salisbury that the UK rapidly concluded was the work of Moscow. Western countries have rallied behind the UK, expelling dozens of Russian diplomats. Russia has retaliated in kind, throwing out western envoys and shutting the US and UK consulates in Saint Petersburg.

In a combative speech laced with literary references, Mr Naryshkin warned that Washington’s fixation with countering a “non-existent, so-called Russian threat” had reached absurd proportions to become a risk to global security. “It’s appropriate to say the dark times of the cold war have returned,” he said.

The West had resorted to unprecedented levels of dishonesty, Mr Naryshkin said, comparing the handling of the Skripal affair to the dystopian world described in George Orwell’s novel 1984.

“All the norms that regulate intergovernmental relations are given precisely the opposite meanings,” he said. “We’re very close to the witches of Macbeth with their thesis that evil is virtue and virtue is evil.”

Echoing the Kremlin’s long-held view that the western liberal democratic model is approaching decline, Mr Naryshkin slammed the US and some European countries for failing to come to terms with the rising powers of Brazil, India and South Africa, as well as China and Russia, that would inevitably dilute their influence.

“Seized by fear of the coming changes, the West is drawing a new iron curtain around itself,” he said. “The level of hypocrisy used by Washington and its satellites to project so-called western might was truly striking,” he added.

Mr Naryshkin called for a more inclusive response to the new threats facing the world in the 21st century, warning that the problems of international terrorism and environmental security could not be resolved without Russian participation.