United Ireland campaign is based on a delusion 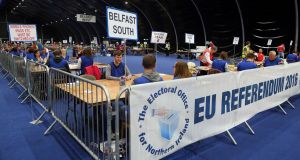 ‘The emergence of a new phase of pan-nationalism is predicated on a weakening of the union in ‘the North’ because of Brexit. The two issues are unconnected for most unionists.’

Open the pages of the Ulster Tatler and there they are. The Northern Irish in their glad rags, grinning for the photographer at birthday bashes, firms’ dos, award ceremonies, book launches, restaurant openings.

Theirs are authentic faces of everyday unionism, a promiscuous display of high spirits by those wanting a good time, politically and religiously uncategorised by the camera. In other words, a Sinn Féin nightmare.

After all, Catholics must be constantly reminded that they are an oppressed minority who should be striving for a united Ireland. Unionists must be harried without term and reminded that Sinn Féin’s day is coming.

Social reality is relevant only when it can be a threat. Catholic students are over-represented at both universities. The former stronghold of the Protestant elite, the Malone Road neighbourhood in Belfast, is now a mixed but predominantly Catholic and seemingly contented middle-class heartland.

So the kettle must always be kept on the boil.

For the past eight years while she worked in a very large Northern Ireland public agency, my Canadian wife was oblivious of the religious and ethnic allegiance of her congenial pool of workmates. I, having lived in Canada until 2009, was greatly heartened by the sociable mix of those employees from – to use that self-fulfilling phrase – “both communities”.

My suspicion is that Sinn Féin cannot abide such normalisation of social relations. And since they exhaust almost all the oxygen on the matter of nationalism (the SDLP is gasping for air), those relations must not find ordinary, much less political, expression.

I have Catholic friends who are unconcerned by living in the United Kingdom (a few expressly wish to do so) but naturally I cannot know how representative they might be. Instinct tells me that that they are a considerable constituency.

Were they to speak out, while asserting their undimmed Irishness, they might help prevent a worsening of our current plight.

Whatever their numbers, they are a far cry from the people in exile and bondage depicted by the recent letter to the Taoiseach sent with fanfare by 200 northern nationalists. I have pondered their claim to be deprived of human rights and can find only one candidate: the right to live in a nation of their choice, an all-island republic free of the United Kingdom.

It is no hostility to the Irish language to suggest that official bilingualism (through an Irish Language Act) can hardly be a human right based on reality. Some 1.7 per cent of the population of the 26 counties daily speak Irish; the figure for the six counties is far less.

After all, Sinn Féin is dedicated to the failure of Northern Ireland

Anyone in Northern Ireland is free to learn Irish and entitled to speak it anywhere save in court or government offices (where Polish and Cantonese would be less impractical). Meanwhile, most unionists care nothing for Ulster-Scots and know there is no cultural equation between it and Irish.

For of course it is the politico-cultural firepower of language that counts for Sinn Féin as the nationalists’ weapon of choice, as I know myself from my experience of Quebec.

Human rights and the Irish language are being used as Macbeth’s enemies used Birnam Wood – to fulfil prophecy by sophistry, advancing on the objective of a united Ireland behind the manipulation of social reality.

Unionists are dismayed that the constitutional parties in the South seem to have fallen in behind Sinn Féin on these (with all due respect) fabricated issues and on Brexit. (Which is certainly not fabricated, but it is a practical problem to be solved, not a constitutional bandwagon to clamber aboard.)

Prophecy is magical thinking that Sinn Féin practise, the idea that a united Ireland is predestined and thus justifiably to be achieved by any means. It suffocates debate, makes every reform a staging post, and obstructs daily reality from flowing in the direction the stream of consciousness takes us, a direction that might well be towards closer unity on the island were Sinn Féin itself magically to disappear.

It also deliberately diverts energy away from the truer issues that affect us all – education, the economy, health, employment. Instead, human rights, an Irish Language Act, legal pursuit of security forces from the time of the Troubles, are the current issues of choice in the politics of prophecy and endgame.

After all, Sinn Féin is dedicated to the failure of Northern Ireland, a dedication implicit in their refusal to speak the name of the jurisdiction or take their seats in Westminster.

How can the circle of this sleepless strategy be squared with participation in government? Surely any political party in the South that aligns itself with Sinn Féin on Northern Irish issues is complicit in the politics of sabotage?

Admittedly the “tight gag of place”, to borrow Heaney, is “cross-community” and not the fault of any one political party. But I believe that Sinn Féin’s violent associations and its authoritarian structure have discouraged the public expression of diverse personal opinion. For a Catholic to speak up for constitutional nationalism and the SDLP is one thing; to voice contentment with the union, even for the time being, would be quite another.

Aside from moderate nationalists and Catholic de facto unionists, the other largely unrepresented constituency today is that of moderate, educated unionism. Its relative silence has seduced even someone as distinguished as Denis Bradley to equate unionism with the DUP and accuse unionism across the board of the ancient practice of withdrawing behind the boom.

This enables Bradley to see a united Ireland on the horizon. He is making a grave error. I do not recognise his likeness of unionism in my pro-union friends and colleagues (who I’m sure have never voted DUP) or hear any pro-unification noises from any of them.

The recent emergence of a new phase of pan-nationalism is predicated on a weakening of the union in “the North” because of Brexit. The two issues are unconnected for most unionists, I am quite sure. To vote Remain was not to vote for a united Ireland in the event of Brexit.

Moderate unionists are taciturn not out of political vacancy but out of a curious embarrassment about openly declaring for the union. It might seem that such embarrassment betrays ambivalence or even misgivings about the union.

It doesn’t. It refracts the erroneous acceptance at some level that it is a united Ireland that (clearly despite contemporary Sinn Féin) bears intellectual weight. This does not disturb their unionism as a core belief but simply creates a cognitive dissonance similar to that which might characterise undeclared Catholic unionists.

Moderate unionists, who seek harmony with their Catholic fellows who might happen to be nationalists, need to scrap the dubious virtue of embarrassment, and declare themselves to prevent what might soon prove disastrous misunderstanding.

The silence is mutual. My wife was surprised to hear no talk around the water cooler on the eve of the last election. It was as though there were no election. To that extent, politics have been abnormal for decades – “Whatever you say, say nothing” as we all remember, like Heaney, being advised.

But as centre-ground politics (for example, a coalition of the willing, say SDLP and UUP, in the absence of Sinn Féin and the decay of the DUP) gained common purchase, it is my belief that the silence around the water cooler would end.

I have always said that the road to a united Ireland should not have a signpost and that who desire it should trust in cultural evolution and the fullness of time.

Instead, and despite the fact that until recently intercommunity social relations were the most amicable I have ever seen them, events have taken an ominous turn. During the recent and deplorable Troubles, the social centre held and the business, professional and academic classes rubbed along quite well.

Now because of the determination of a minority of educated republicans smelling meat, the faultline is threatening to run upwards, through the academy and professions. Pan-nationalism now looks cultural, not just political, and might even become social. If the upward fracture continues, we will be in serious trouble.

I feel the fracture in my own experience. I have spent five decades studying sympathetically Irish literature in English. Sinn Féin, they will be gratified to know, have just about convinced me that I have pursued a foolish career. Decades ago, they chilled any warmth I had towards a unified island.

Through another catastrophe they might achieve their version of a united Ireland. If they do, I (or my shade) will have followed Sean O’Casey, George Russell (AE), John Eglinton and others out of Ireland once they found what an Irish free state entailed.

I will, however, feel worse for those smiling faces in the Tatler, wanting, I suspect, only the good time they deserve. They almost had it in their command.

John Wilson Foster’s study, Irish Novels, 1890-1940, was published by Oxford UP in 2008. His latest book is Pilgrims of the Air: The Passing of the Passenger Pigeons (New York Review of Books, 2017)