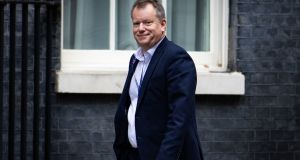 For all that the British government’s announcement of its plans to break international law this week were shocking, they were also not unexpected.

Looking back over the years of negotiations that have led to this point reveals that the current crisis has deep roots, and indeed that the European Union has been preparing for it.

The Withdrawal Agreement reached late last year between the EU and Britain, and signed into law by the House of Commons in January, had its implementation “baked in”.

It provided for the establishment of a joint EU-UK committee to oversee the enacting of everything agreed in it, with specialised sub-committees dedicated to areas such as arrangements for the North.

An agreement to govern future relations between the EU and Britain could only be reached if London enacted the prior one, Brussels made clear.

“The faithful and effective implementation of the Withdrawal Agreement is absolutely central to our ongoing negotiations. This is the line that we will hold together . . . in particular on Ireland and Northern Ireland,” were some often-repeated words of the EU’s chief negotiator Michel Barnier.

Though no one dared to believe that London would really renege on an international agreement – and indeed their own officials repeatedly assured allies and the media that the British government, heaven forfend, would never do such a thing – psychic powers were not required to suspect that they might.

Prime minister Boris Johnson repeatedly said there would be no Irish border checks despite signing up to them in the Withdrawal Agreement, as did his cabinet minister Michael Gove. It was left opaque as to whether they were uninformed or dishonest, but observers in Brussels were concerned.

In a report in February that now looks prescient, the Sunday Times reported officials working under the UK’s negotiator David Frost were secretly doing “deadly serious internal work . . . about not obeying the Northern Ireland protocol.” It even suggested attorney general Suella Braverman was given her job specifically because she would be willing to sanction the plans, which she has duly done this week.

The EU has now given the British government until the end of the month to reverse its plans, or it will seek legal recourse.

This scenario is also provided for in the Withdrawal Agreement. The offended side must set out its complaints in writing to the joint committee. If the dispute is not resolved, an independent arbitration panel is set up, which can impose fines and raise the issue to the European Court of Justice.

The EU has said it will “not be shy” in doing this. “We are that boring and law-abiding,” an EU official briefed. “That’s the rule of law for you.”

If London simply didn’t want a deal with the EU, it would not need to introduce this dramatic gambit. It could simply run down the clock.

The British government’s actions this week are therefore being interpreted in Brussels as either a bid to provoke the EU into withdrawing from the talks and taking the blame for the collapse, or yet another attempt to split the Northern Ireland issue off from the rest of the negotiations, in a test of the resolve of the fabled German carmakers, to see how willing they are to put Ireland’s border issues above trade.

The EU is determined to fall into neither trap. In a show of Brexit’s unusual ability to unite its members, all 27 voluntarily joined the emergency meeting of the joint committee this week.

Britain has often accused the EU of not taking seriously or properly understanding its quest for “sovereignty”. The reverse charge could also be made. Special privileges for members in return for agreeing common rules are what the bloc is about. It’s mostly made up of small nations. Attempts to pick on one are an opportunity for it to show its worth.