Evidence emerges of US election interference threats by Russia, China and Iran 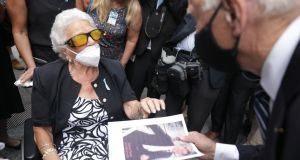 America paused to remember the victims of the September 11th terrorist attacks on Friday as US president Donald Trump and his Democratic rival Joe Biden travelled to Pennsylvania to pay their respects.

Speaking at an event in Shanksville, where United Flight 93 crashed after passengers took control of the aircraft, Mr Trump paid tribute to the almost 3,000 people who lost their lives in the terrorist attacks 19 years ago.

“The heroes of Flight 93 are an everlasting reminder that no matter the danger, no matter the threat, no matter the odds, America will always rise up, stand tall and fight back,” he said. “To every 9/11 family all across this nation: The First Lady and I come to this hallowed ground deeply aware that we cannot fill the void in your heart or erase the terrible sorrow of this day.”

Mr Trump spoke in front of the flags of Australia, Japan, Puerto Rico, Germany and the US – the nationalities of those on board the flight which is believed to have been heading for the US Capitol in Washington before passengers intervened.

In New York, vice-president Mike Pence and Democratic candidate Joe Biden shared elbow bumps as they both attended a memorial service at the site of the World Trade Centre where two hijacked planes flew into the twin towers on the morning of September 11th, 2001.

Mr Biden later visited Shanksville, where he paid tribute to the victims of Flight 93.

Earlier in the day, Mr Biden told reporters that it was not a day for campaigning. “I’m not going to make any news today. I’m not going to talk about anything other than 9/11. We took all our advertising down, it’s a solemn day, and that’s how we’re going to keep it,” he said.

On return to Washington, Mr Trump announced that Bahrain had agreed to normalise relations with Israel, following a similar move by United Arab Emirates last month. “This is a truly historic day,” he said in the Oval Office. “So interesting that it’s on 9/11 . . . When I took office, the Middle East was in a state of absolute chaos.” The move is the latest sign of a thawing of relations between Arab countries and Israel, and is unlikely to be welcomed by the Palestinian leadership.

Friday’s events took place 52 days before America’s presidential election, with polls showing Mr Biden ahead, though his lead is tightening.

As both candidates enter the final seven weeks of the campaign, new evidence has emerged of the threat from foreign interference in the forthcoming election.

Four years after the Russian military intelligence unit hacked the email server of the Democratic National Committee, a new report by Microsoft warned Russia, China and Iran are attempting to hack the accounts of individuals associated with both the Biden and Trump campaign.

The report was published a day after a whistleblower claimed that White House officials suppressed intelligence showing Russian interference because “it made the president look bad”.

Earlier this week, Democratic vice-presidential nominee Kamala Harris said she believed that Russian interference could help Mr Trump win the White House for another four years. “Theoretically, of course, yes,” she said. “I am clear that Russia interfered in the election of president of the United States in 2016,” she said, noting she is a member of the Senate Intelligence Committee.  “We have published detailed reports about exactly what we believe happened. And I do believe that there will be foreign interference in the 2020 election, and that Russia will be at the front of the line.”