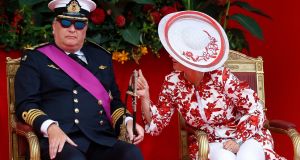 Prince Laurent at a military parade to celebrate Belgium’s National Day on July 21st: is taking legal action over loss of 15 per cent of his annual €307,000 allowance. Photograph: Julien Warnand

It was not the first time the prince had fallen out with the Belgian government. But Prince Laurent of Belgium, brother of King Phillipe, and reduced from third to 12th in line to the throne since the decision was made to let women accede in 1991, is now suing the Belgian state because parliament fined him for attending a diplomatic reception without permission.

He claims it’s a massive violation of his human rights.

The prince is taking a case to the country’s Conseil d’Etat, the supreme administrative court, over the deduction of €46,000, or 15 per cent of his annual €307,000 royal allowance, for attending in full dress uniform, with medals, a celebration at the Chinese embassy for the 90th anniversary of the Chinese army.

He claims that the action of MPs is a gross violation of his rights, comparing his “persecution” to that of Jews. “I often think of the Jews who were killed only because they were Jews,” he has said. “How is it still possible in this day and age that a person can be accused simply because they belong to a family or a particular group of people?”

Prince Laurent, unfortunately, has form as an errant, somewhat eccentric member of the royal family. He had previously been warned about unsanctioned visits to Libya to meet Gadafy, and to former Belgian colony, the Democratic Republic of Congo. And had been told by the government not again to get involved in any diplomatic activities without prior notice. He signed a promise to undertake no further jaunts abroad without government approval.

He has been in trouble for gaffes that would put Britain’s Prince Philip in the halfpenny place, once on TV observing that “Women are like helicopters, they are fragile and cost about the same”. He has received multiple speeding fines and lost his driving licence.

Media reports in March 2007 suggested that Laurent was no longer welcome at the Royal Palace because of his “peripheral” role in a corruption scandal over the redecoration of his home by the Belgian Navy.

Enough was enough for Belgium’s prime minister, Charles Michel, after the China party, and he asked MPs to sanction the prince.

Laurent wrote a lengthy emotional letter to parliament before the vote, arguing that, as a royal, he is unable to work for a living. He described the vote as “the trial of my life” and said it would “likely cause me serious prejudice” if MPs went against him.

“This allowance, the reduction of which is being discussed as a result of political or media currents, is the price of a life – the price of my life, which is largely behind me now,” he wrote.

To no avail, and so to court.

His lawyer complains that the legislation on which the fine is based is unclear, not allowing the prince to know the precise limits of his official duties. And he complains that a recent letter to the government asking it to clarify the law on royal allowances remains unanswered.

He also claims that restricting him from meeting controversial foreign leaders would amount to forced “social isolation”.

The case will be based, lawyer Laurent Arnauts says, on objections to the abuse of the prince’s fundamental rights and the legal overreach of the state.

Prince Laurent is the second son of King Albert II and Queen Paola, and younger brother of King Philippe. His visit to the embassy would probably have gone unnoticed except that he tweeted a picture of himself at the event.