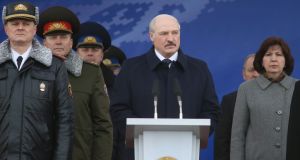 Alexander Lukashenko: The president of Belarus is facing a series of “March of Angry Belarusians” protests. Photograph: Maksim Guchek/EPA

It might seem an odd time to take a vacation, but when street protests erupted in his impoverished country last month, Alexander Lukashenko, the authoritarian president of Belarus, took off for Russia’s winter sports resort at Sochi.

Vladimir Putin had often invited Lukashenko to ski with him at Sochi. But in a mark of the dismal state of relations between Moscow and Minsk, the Russian president decided this was no time even for an informal meeting on the slopes.

Lukashenko might have hoped to persuade Putin to offer Belarus economic assistance – a loan, a cut in Russian gas prices, the removal of restrictions on Belarusian food imports. But the Belarusian leader – known as Batka (Daddy) to his people – returned home snubbed and empty-handed.

Lukashenko, who has served five terms since becoming president in 1994, is now facing the most serious political and economic crisis of his rule. The “March of Angry Belarusians” protests that began in Minsk on February 17th have spread to other big cities, prompting observers to warn that Belarus is on the brink of a revolution.

Demonstrators initially demanded the abolition of the so called “parasite tax”, a draconian levy on unemployment that has placed unbearable strain on the impoverished population. But as the grassroots protest movement gains momentum, there are ever more frequent calls for the president to resign.

Belarusians “are fed up with Lukashenko, his inept officials and two decades of dictatorship,” Andrei Sannikov, an exiled Belarusian opposition leader, said last week. “Twenty-three years of this Latin American soap opera is just too much,” he told UpNorth, an online newsletter that covers northern Europe and the Baltic region.

As a founding member of the Moscow-led Eurasian Economic Union, Belarus is supposed to be one of Russia’s closest allies in the former Soviet Union. But ties between the two Slavic nations have become increasingly vexed since Russia’s annexation of Crimea.

With western sanctions and low oil prices weighing on its economy, Russia has ceased to be a generous patron to Belarus and is haggling over oil and gas deals and the future terms of loans and subsidies.

Lukashenko’s response is to seek rapprochement with the West, a move that has irritated the Kremlin. After Belarus introduced limited human rights reforms last year, the EU agreed to lift sanctions imposed after faulty elections in 2004, as well as extend some development assistance.

Belarus is now trying to negotiate a $3 billion loan from the International Monetary Fund, but the facility is dependent on tight fiscal polices that will be risky to introduce at a time of social unrest.

In a move the opposition interpreted as a sign of weakness, on Thursday Lukashenko announced the temporary suspension of the parasite tax land promised that Belarusians who paid the levy in 2016 would be refunded if they found jobs by next year.

However, warning that “Maidan fanatics” were plotting to unleash “bloodshed and disaster” in Belarus, the president ordered police to take tough action against the organisers of future protests.

Activists at the Belarusian National Congress (BNC), a political movement formed last year in an effort to unite the fractured opposition, are still urging citizens to turn out in force at a rally in Minsk to coincide with the annual Freedom Day, an unofficial holiday that marks the 1918 foundation of the short-lived Belarusian People’s Republic. Plans are to stage another demonstration the following day all over Belarus.

BNC is promoting the March 25th rally with stickers decorated with clenched fists and charging bulls, which have been plastered on buildings and lamp posts all over Minsk.

Looking ahead, opposition groups are planning a series of protests against joint military exercises with Russia, which Belarus has agreed to host on its territory in September. So it looks as if the Belarus spring could turn into a summer of discontent.